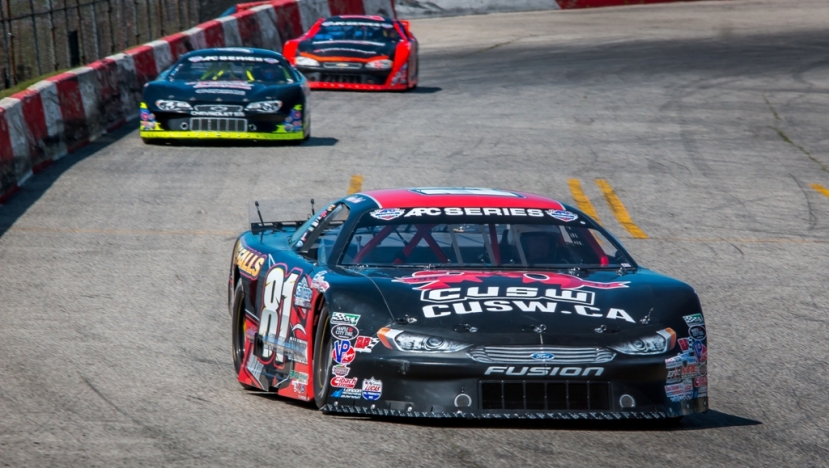 SAUBLE BEACH ~ Although 2016 APC United Late Model Series champion Andrew Gresel has not yet had the results in 2019 that he has come to demand of his Sauble Falls Racing program, he’s not quite ready to say that his early season has been without its merits.

The second-generation racer battled through mechanical issues en route to a 21st-place finish in the APC Series opener at Sunset prior to improving to an 11th-place result in Round 2 at Flamboro Speedway on June 8th.

“We were better at Flamboro than we were at Sunset but we’re still far from where we want to get,” admits Gresel. “An 11th-place finish – when you’re out here with the best talent in the province – really isn’t something to be mad at. It’s just frustrating because we know that our team hasn’t even started showing how capable we are this season”

The longtime Pro Late Model stalwart rebounded from a poor showing in time trials at Flamboro, eventually running as high as 6th after dodging a myriad of mid-race incidents, before spinning late in the 100-lap event.

Gresel points to the lack of qualifying success as part of the reason the team has been struggling thus far and hopes to improve upon his Time Trials results when the team heads to Jukasa Motor Speedway for Round 3 of the tour on June 22nd.

“Time Trials have never been my specialty but it’s something that I know to improve on wether I like it or not,” explains Gresel. “You need to be well-rounded if you want to succeed on this tour. You have to take every advantage of every step of your race day”

“Missing out on a good qualifying run is a problem for sure. You can’t dig yourself a hole early in the night because the guys you’re racing against are too good to let you dig yourself out. We’re gonna make sure we’re better at Jukasa”

With eight-races remaining on the tour’s schedule, Gresel hopes to continue the improvement shown between Rounds 1 and 2.

“We’re going to go home and use these first two starts as a building block. There’s room to rebound in the next eight rounds”

“This team can get the job done at any speedway,” adds Gresel. “I think our numbers speak for themselves. This team has been in contention before when things haven’t always gone our way, and we need to get back to that.”

For more information on the Prelude to the Nationals on June 22nd, visit www.JukasaMotorSpeedway.com and www.apcracingseries.com