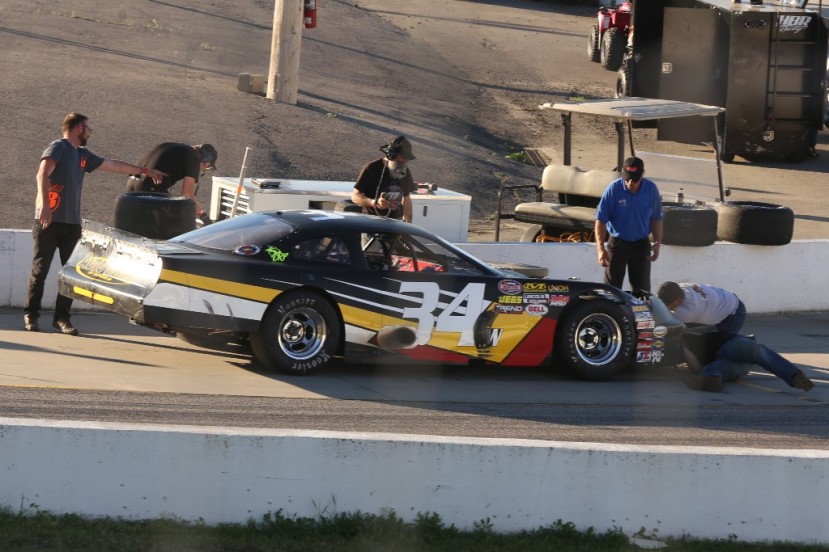 INNISFIL, Ontario — After getting caught up in an incident in the first feature, Robbie Sikes was able to rebound for a pair of top-15 finishes.

After qualifying mid-pack for the first feature, Robbie Sikes was ready to make his way forward once the green flag dropped. However, contact on Lap 3 would see Sikes go around along with another competitor.

Restarting from the tail of the field, he would work at trying to make his way forward once again. However, contact would happen ahead of him, blocking the track. Although Sikes was able to get slowed down, it wouldn’t be enough, as contact from behind resulted in him making significant front end contact with another competitor. He was able to make his way down pit road, where the team immediately went to work and had him back out before the green flag flew once again.

Restarting from the tail, he was able to make his way up to 13th by the caution with 16 laps to go, ultimately crossing the finish line with a 14th-place finish.

Starting 14th for the second feature, he was able to avoid the incidents through the first 10 laps, set to restart inside the top-10 with 25 laps to go after the second caution. However, before the green flag was flown, Sikes was sent to the tail of the field for the restart. Restarting from the tail, he avoided another incident en route to an eventual 15th-place finish.

Despite the night not going as planned, Sikes still has two top-10 finishes on the season in four features to date, allowing him to sit 10th in the track standings. Notably, he is only 24 points behind fifth-place.

Sikes will be back at Sunset Speedway on Saturday, June 15 for the next NASCAR Whelen All-American Series Division I competition, which will feature a 50-lap feature.

Keep up with Robbie Sikes and Spencer-Walt Motorsports by liking their facebook page at https://www.facebook.com/pages/Walt-Motorsports/524817640964689?fref=ts.