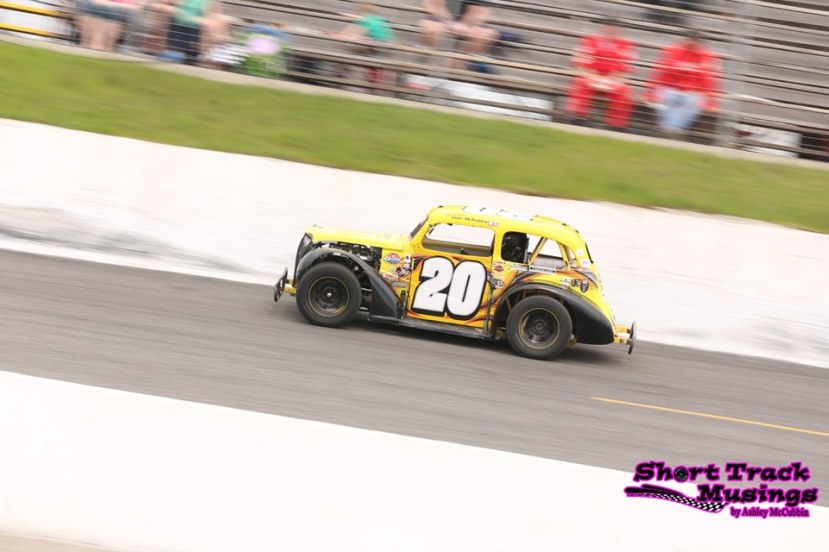 After starting off the season with a fifth-place finish in the season opener at Peterborough Speedway, Cole McFadden is ready to return to the patch this weekend for the second event of the 2019 campaign.

“Entering the 2019 season is probably one of the most nerve racking seasons I’ve been prepared to run so far,” he told SHORT TRACK MUSINGS. “With the new Z09 liquid cooled motor that INEX has released to replace the original air cooled 1250, it has really thrown a twist into the kick off to this season.”

Although McFadden was fast last year, motor issues plagued him throughout the season as he blew up four motors over a six-race span. That’s why entering the 2019 campaign, it has become a focus and something that he has his fingers crossed on not becoming an issue once again.

“Aside from that, our goals are the same just as they would be every season, show up, race, and head to the front,” he added. “With a solid set up in our car thanks to my father, I am more then confident that we will have a competitive car again this season.”

Although the Legends Series opens their season at Peterborough Speedway, the schedule will take the No. 20 New Age Excavating, DTF Construction, Cedar Line Farms Sedan across the country, including Grand Bend Speedway at the beginning of July.

“Whenever we go up there, it really shows how our series is really like a big family that bicker & try to be better then one another while out on the track,” he commented. “We usually only head to Grand Bend in early September so it will be nice to head out there at the start of the summer this season to see what kinda show the OLS can put on for the folks in western Ontario.”

The other big date on the calendar is August 17 and 18 with the Canadian Legends Nationals at Sunset Speedway.

“The Canadian Nationals has been a HUGE step for putting the Ontario Legends Series on the map,” he said. “With more & more racers travelling up from the US every year to come play on our turf, it is definitely a pat on the back for the series. I think the move to Sunset for the CDN nationals will be like icing on the cake for those drivers travelling the distance considering sunset is a NASCAR Home track.”

The continued hype for the series, whether the tracks they are traveling to or the big event in August, is no surprise as they have become known for putting on a show no matter where they go.

“The competition level is absolutely through the roof in the OLS,” he commented. “If you are in Ontario and want to run a late model/full-size car at a extremely competitive level, you would run the APC Series. If you don’t quite have the funding to run a Late Model but are still looking for the same level of competition, the OLS is your place to be.”

Some of the competitors on the list to watch for McFadden would be Matt Haufe, Adam Cuthbertson, Nick Ledson, and Kevin Foisy as they are “the big names that give us goosebumps pulling into the pits.”

“But some other drivers that I’ll definitely be watching out for are Wes Cuthuberson, Andre Forini & Miles Tyson,” McFadden added. “I think all those drivers will definitely be seeing checkered flags this season.”

On top of the familiar faces, there are also several rookies joining the Ontario Legends Series, which McFadden advises to those drivers “to expect to be slow when they first start.”

“The drivers in our series are the best in North America; not only do they win here, but they win everywhere they travel to,” he commented. “They are the best of the best in the Ontario Legends Series. So I think the new drivers need to know that it will take them years before they can play, or even keep up with the big dogs at the front.”