Over the course of the 2018 season, it’s no secret that there were some stunning mini stocks across the province of Ontario as each racer had a unique design of their own.

Rich Schwartzenburg, with the support of Craig Kamrath and ImageWraps.ca, put together a contest to showcase the best of the best. Through the Ontario Mini Stock group, fans have been voting daily for their favourite in a series of match-ups, with even a couple upsets occurring along the way through the bracket thus far.

After weeks of voting, it is now down to the final four – Alex Hastie, Samantha Shaw, Kevin Bridge, and Jake Gilbert. Short Track Musings recently caught up with each of the drivers to talk to them about their schemes. 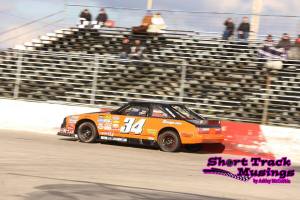 Alex Hastie says the design of the No. 34 was set to match that of Chad Eden’s car, as he built the body for the mustang. The number influence also comes from the outside, too, as the No. 34 was chosen by his car owner Donny Tremble.

When it comes to looking at his fellow competition, Hastie feels the best looking car, other than his own of course, would be the No. 86 Spira Mustang that was piloted by Erik Dalla Riva in 2018.

Hastie spent the 2018 campaign traveling to a variety of different tracks over the course of the season, scoring top-five’s along the way.

“Our 2018 season was a big learning curve for us with big set up changes and going to a lot of new tracks for me as well,” he commented. “(It) was definitely a good year, but we plan to make a lot more improvements for next year. I would like to go race at Jukasa (Motor Speedway) next year that’s definitely a bucket list track for me!” 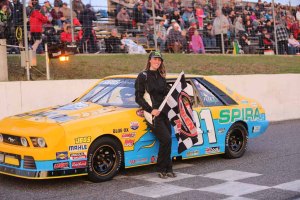 The No. 81 Mustang for 2018 was a throwback to a previous scheme that Samantha Shaw ran back in her first year of racing nine years ago, just with different colours.

“Even back then, I ran it so the car would match the rest of the “Shaw family” cars,” she commented. “I think at the time there were probably five or six cars running with this same design in various classes. Basically, I’ve always loved this design and decided I wanted to bring it back.”

Her car number also relates back to the family history, as she runs the No. 81 for her grandpa who started the racing tradition for the entire Shaw family. But speaking of the family history, she says the biggest surprise would be her dad Randy Shaw not catching the driving bug.

“He’s much happier being the mechanic behind the scenes,” she added.

When it comes to looking at her competition, she says outside of her own car, her favorite would be Andy Kamrath.

“I’ve always loved Andy (Kamrath)’s cars,” she commented.” They’re super clean, the bodies always look nice, and maybe I have a thing for a blue and yellow car.”

She had a successful 2018 campaign, picking up a feature victory at Sunset Speedway en route to placing second in the year-end standings.

“This past season was a huge success for me, was easily my best season yet on track,” she commented. “There will always be room for improvement but my driving style and confidence advanced a ton.”

Now going into 2019, she says the one thing that she wants to check off the bucket list for the season is to win more than one feature, as it seems she can only knock one victory out per year in past campaigns.

For the No. 17 Honda, it’s easy to see where the trademark orange comes from as it’s the color of his primary sponsor LiUNA, with the paint scheme being drawn up through ImageWrap’s imagination. As far as the car number, Bridge says it’s based off of two things.

“My birthday is the 17th and when I started racing I liked Matt Kenseth, and he was the 17 at that time,” he commented.”

Looking at the fellow competition, he says that there are a lot of different designs that caught his attention this year as he looked at those who were able to keep them clean, while continuing to look good.

When it comes to on-track performance, Bridge had a successful year finishing second in both the Sauble Speedway Mini Stock standings and the Great Lakes Concrete Series (GLC) standings.

“Bridesmaid in points for both series, but 7 feature wins,” he said. “Having a broken piston on a new motor on night one at Sauble really set the tone and put me in a very large hole to start things out, and then two disappointing finishes in the GLC races.”

He was quick to reveal that he will be back in 2019, with plans to “check out a new track this year.”

The paint scheme for the No. 03 this past year was wrapped and designed by Chuck Barton at B&B Decals, with the choice being made to go with a blue, white and black paint scheme due to Gilbert’s favourite colour being blue.

The No. 03 also has a connection to the young driver, as it’s a number he has used through all of the sports that he played and through the racing ranks, following in his dad’s footsteps.

Looking at the competition, he says another car that he liked would be Craig Kamrath’s No. 51 entry as it “really stood out.”

Gilbert was able to put together a successful campaign at Flamboro Speedway, putting himself in the midst of the championship battle for a top-five year-end points finish.

“Last season was rough for us – wrecked the car twice, had some issues all year, but still managed to fight back and be in in the championship battle on the last night,” he commented. “I can’t thank the crew enough for the help and support I received this year!”

Beyond the adversity on-track, Gilbert had some off the track as well as he raced on August 4th with a broken leg, that he had just broke the weekend before. By the way, he still had a successful night, finishing third in the first feature with a win in the second.

Moving forward, he says the one thing on his bucket list he wants to check off would be racing at Jukasa.

“I think most people are going to have the same goal,” he commented. “Having a mini stock race there is a pretty cool opportunity; not sure if that is what I would be driving there or not, but we’ll see what’s in store!”