While Dale Lucas was crowned the 2018 McClurkin Properties Pure Stock Champion at Flamboro Speedway, there were plenty of drivers who had success over the course of this past season.

2 wins for Blair Mayhew put a smile on his face

2nd of June was swept by Rodney Rutherford

3 victories by Dylan Sharpe is a good rookie campaign

4 wins for Ryan Hillar made this year successful

4.125 was the second best average finish of 2018, set by Andy Wheller in his eight features ran.

5 of Jared Bodnar got his lone victory on September 15 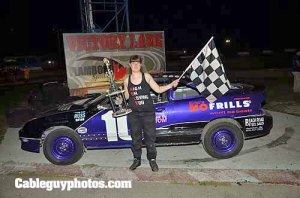 10 of Scott picked up two victories this season

17 top-five’s by Sharpe led all drivers this year

22 of September was the last night of racing, and saw Labarbera take home his lone win this season

26 features were ran across 13 nights of competition

32 of Gilian Hils only came out for one night in 2018, but was successful with a victory

32 competitors scored a top-10 this year

78 of Kerkhof took home a win on September 8