The victories keep adding up for Gary McLean as the multi-time OSCAAR Modified Champion won the feature on Sunday afternoon at Sunset Speedway.

Gary McLean won the fifth heat ahead of Emms, Gordon, Harper, Reinhart, Hearty, Mombourquette, Di Venanzo, and Tyson. Tyson was unable to take the green flag due to mechanical issues.

Jason Keen won the sixth heat ahead of Strawn, Schrenk, DiBello, Gignac, Wilson, Balych, and Balson. The poor finishes for Balych and Balson came following contact in turn one on the opening lap. 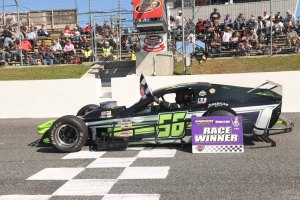 With 29 cars on property, a b-main was run to set the back end of the field and determine who would not make the show. Jase Cornell won the event ahead of Tyson, Billy Zardo, Shawn Chenoweth, Balych, Di Venanzo, Scott, Wilson, and Bullen; notably, Bullen finished last after going for a spin and running into mechanical problems. The top-four would transfer to the main event, while Di Venanzo and Wilson made the show on points. Therefore, this would result Balych, Scott and Bullen not making the main event.

McLean would jump out to the early lead ahead of Keen and Horner, but the caution would come out on Lap 2 for an incident in turns three and four involving Price and Tyson. The restart would produce the second caution on Lap 3 as Schrenk would go around, collecting Mombourquette in the process. With 48 laps to go, McLean led Keen, Gordon, Horner, DiBello, Elliott, Hearty, Reinhart, Gignac, Showler, Strawn, Emms, Bowden, Harper, Balson, Milwain, Chenoweth, Tyson, Di Venanzo, Price, Wilson, Schrenk, and Mombourquette.

Mclean got a good restart, as Horner got alongside Keen for second, with contact further back between Elliott and Reinhart. Horner would get the second spot on Lap 5 ahead of Keen, Gordon and DiBello as the battle for sixth continued between Elliott and Reinhart. Reinhart took the spot on Lap 7, with Showler and Hearty side-by-side for seventh. Showler would contact with the frontstretch wall on Lap 8, allowing Hearty to take the spot ahead of Gignac, Harper and Strawn, with Emms alongside Showler now for 11th.

With 13 laps on the board, McLean continued to lead ahead of Horner, Keen, Gordon, Reinhart and DiBello. Hearty would get alongside DiBello for sixth at Lap 15, with Harper and Gignac side-by-side for eighth. Hearty took the sixth spot two laps later ahead of DiBello, Harper, Gignac, Strawn, Balson, Emms, Showler, and Elliott. Reinhart continued his climb forward, passing Gordon for fourth on Lap 20. He would then get alongside Keen for third four laps later, but the caution would fly at the halfway mark for Gordon spinning off of turn four. With 26 laps to go, McLean led Horner, Keen, Reinhart, Hearty, DiBello, Harper, Gignac, Strawn, Balson, Emms, Showler, Elliott, Tyson, Bowden, Milwain, Cornell, Chenoweth, Gordon, Price, Di Venanzo, and Wilson.

McLean got a good restart ahead of Horner, with Reinhart up to third as Hearty got alongside Keen for fourth, with Harper and DiBello side-by-side for sith. Harper would take the sixth spot on Lap 28, with Balson looking to follow him through. Reinhart would continue moving forward, taking the runner-up spot with 21 laps to go ahead of Harper, as the battle for fourth continued. The caution would then come out, though, as there’d be an incident in turn four involving DiBello, Strawn, Elliott, and Bowden. Gordon would also pull off the track, done for the event. With 20 laps to go, McLean led Reinhart, Horner, Hearty, Keen, Harper, Balson, Gignac, Emms, Chenoweth, Tyson, Milwain, Price, Cornell, Schrenk, Showler, Di Venanzo, DiBello, Elliott, Strawn, and Wilson. 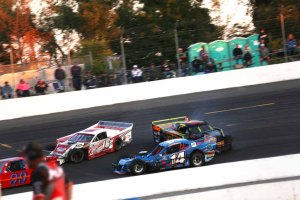 McLean got another good restart ahead of Reinhart, as Hearty and Horner battled for third. Hearty took the spot on Lap 32 ahead of Horner and Keen, as Balson got alongside Harper for sixth. Balson took the spot on Lap 34, with Emms and Gignac side-by-side for eighth. Balson continued to move forward, snagging the fifth spot on Lap 36, bringing Harper through with him to bump Keen back to seventh. Behind him, Gignac ran eighth ahead of Milwain, Emms, and Chenoweth.

Balson’s climb continued as he’d make his way by Horner with 11 laps to go to move up into fourth. He would challenge Hearty for third six laps later, but there’d be contact, resulting in Hearty going around for the fifth caution at Lap 45. With six laps to go, McLean led Reinhart, Horner, Harper, Keen, Gignac, Milwain, Chenoweth, Emms, DiBello, Schrenk, Showler, Elliott, Price, Balson, Hearty, Cornell, Di Venanzo, and Wilson.

McLean got a good restart to keep the lead ahead of Reinhart, with Harper and Horner side-by-side for third ahead of Gignac and Keen. Harper would get the spot with two laps to go, but the caution would come out for Wilson having a mechanical issue.