The victories continue to add up for Brandon Watson as the 2017 APC Auto Parts United Late Model of Ontario Tour Champion scored another one on Saturday night at Jukasa Motor Speedway.

“We definitely had a good car,” he told SHORT TRACK MUSINGS. “McColl Racing Enterprises always gives me a good piece. It started off tight as we got off to a good lead, saved some stuff. Fortunately, it started getting tight in the middle a little, and the 84 was able to get by us on the restart. But we stuck with it, and got back into the side of him, and get by him coming to the white flag for the win.” 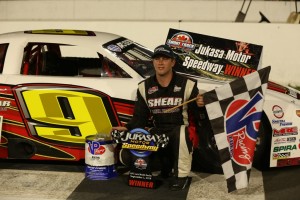 Starting seventh for the 100 lap event, Watson began to make his way forward immediately, taking the top spot on Lap 17. From there on, it seemed he was on cruise control as he led through the center of the event without much challenge to his position.

The race took a turn when the caution came out with six laps to go for Shae Gemmell having a problem. Fitzpatrick would get a good restart, clearing him for the top spot initially. Watson didn’t fade behind him, though, getting back alongside, passing him as they came to the white flag. Fitzpatrick challenged back down the backstretch on the last lap, but was unable to make anything happen.

While the race was exciting for the fans, Watson admitted post-race that he wasn’t liking being challenged for the spot at the time.

“I definitely wasn’t liking it too much,” he commented. “I wasn’t sure what was going to happen once he got in front of me as I hadn’t raced him all night. But we stuck with it, knew we had a good car, waited for a chance to get inside of him, and was able to pull off the win.”

The victory marks Watson’s fourth of the 2018 campaign as he will enter the season finale at Delaware Speedway ranked fifth in the standings, 15 points out of the second position. Going back-to-back as series champion, though, is a long shot as he is currently 57 markers behind Fitzpatrick.