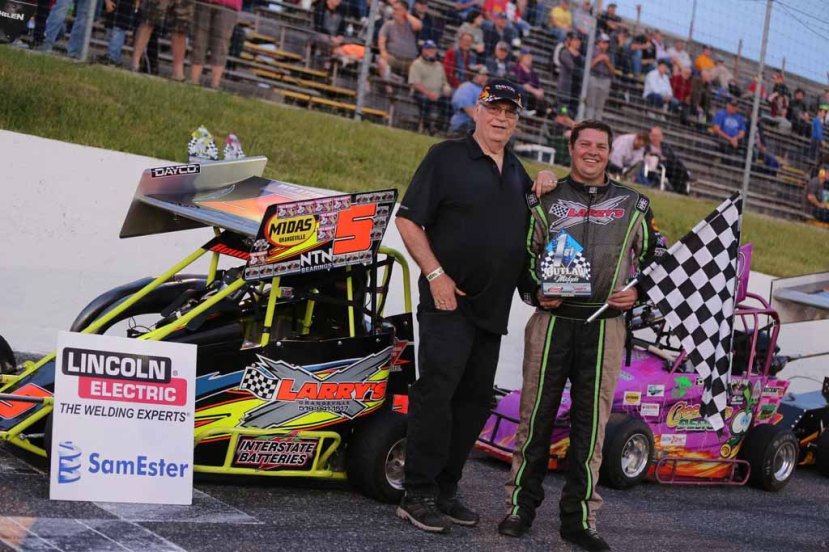 For the second straight time this year, Jody Bound would be victorious in the Outlaw Midget feature at Sunset Speedway. 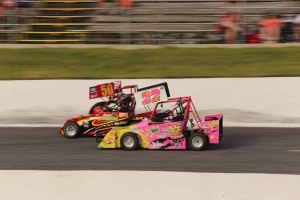 The first heat didn’t start off smoothly as Amanda McCall ran into a problem, with Lorn Van Dusen catching a piece of the outside wall as he tried to get around her slowing machine. Wally Wilson picked up the win ahead of Richard Woodland, Nigel Buttivant, Jeff Blackburn, Larry Lawson, Wayne McKibbon, Griffin Powell, Nick Spiez, and Zack Millman.

The third heat didn’t start off smoothly with Millman going for the spin in turn four on Lap 2. Then on the last lap, both Powell and Wilson ran into mechanical issues. The restart would see Millman go around for a second time in turn four. Nigel Buttivant picked uop the win ahead of Woodland, Blackburn, Lawson, Van Dusen, McKibbon, and Millman. 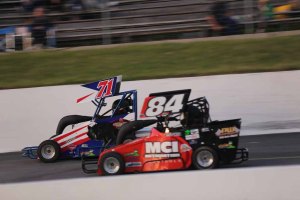 Come feature time, Ryan Brown jumped out to the early lead ahead of Wayne McKibbon and Rob McCall. However, it didn’t take long for Jody Bound to make his presence known, getting alongside McKibbon for second at Lap 2. He would complete the pass a lap later, and then passed Brown to take the top spot on Lap 3.

Brown now ran second ahead of McCall, Jessica James, Nigel Buttivant, and McKibbon. Mikey Homewood would move up into sixth on Lap 6, with Richard Woodland looking to follow him through.

There were battles around the track, though, with McCall getting alongside Brown for second at Lap 7, completing the pass a lap later. The first caution would fly, though, as James would go for the spin in turn two. With 14 laps to go, Bound led McCall, Brown, Buttivant, Homewood, Woodland, Jordan Howse, McKibbon, Johnny Paradzinski, Larry Lawson, Lorne Van Dusen, Nick Spiez, Kevin Spiez, and Chris Ruigrok.

Bound got a good restart to keep the lead ahead of McCall, Buttivant, Brown, Howse, and Woodland. Paradzinski continued his climb forward, passing Woodland for sixth on Lap 11. Woodland now ran seventh ahead of Lawson, Van Dusen, and Nick Spiez. Unfortunately, Wooland’s run came to an end on Lap 13 when he headed down pit road with a problem. 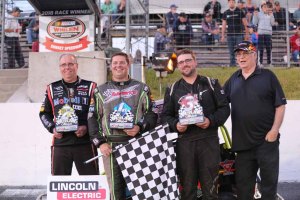 The second caution of the feature would fly on Lap 14, as a result of a double spin by Homewood and Nick Spiez in turns three and four. With 11 laps to go, Bound led McCall, Buttivant, Brown, Howse, Paradzinski, Lawson, Van Dusen, Kevin Spiez, McKibbon, Ruigrok, Homewood, and Nick Spiez.

Bound got a good restart to keep the lead ahead of McCall and Buttivant. Meanwhile, Brown would slow with a problem as the caution flew for debris at Lap 17. With eight laps to go, Bound led McCall, Buttivant, Howse, Paradzinski, Lawson, Van Dusen, McKibbon, Kevin Spiez, and Homewood.

Bound got a good restart to keep the lead ahead of McCall and Howse, with Paradzinski alongside Buttivant for fourth ahead of Lawson. Paradzinski got the spot on Lap 19 ahead of Buttivant, with McKibbon getting alongside Lawson. McKibbon was unable to complete the pass, instead getting bumped back a spot as Homewood moved up into seventh. Homewood kept moving forward, passing Lawson for sixth at Lap 22.

Jody Bound would lead the rest of the way to score the victory ahead of Rob McCall, with Johnny Paradzinski rounding out the podium after a last lap pass on Jordan Howse for third. Nigel Buttivant finished fifth, followed by Mikey Homewood, Larry Lawson, Wayne McKibbon, Lorne Van Dusen, and Nick Spiez. Kevin Spiez and Chris Ruigrok rounded out the field.