Brandon Watson got a good start to grab the early lead ahead of Glenn Watson, Tiemersma, Howse, Grosman, Bourque, Foster, Capirchio, Spencer-Walt and Shepherd. Unfortunately, Passer failed to make it past Lap 1 as he headed into the pits with issues. 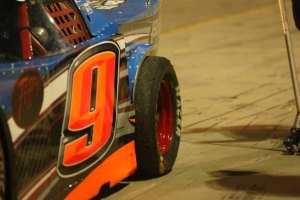 The lead-lap cars inverted for the second feature, Ian Bourque started on pole ahead of Grosman, Howse, Tiemersma, Glenn Watson, Brandon Watson, Capirchio, Shepherd, and Spencer-Walt. Notably, Brandon Watson failed to take the green flag for feature two after breaking something in the rear end.

From there on, Sean Grosman led the rest of the way en roué to scoring the victory with Jordan Howse second and Glenn Watson third, following a late-race pass on Derrick Tiemersma. Ian Bourque finished fifth ahead of Gord Shepherd, Dario Capirchio, and Rick Spencer-Walt.

With the series points system used to determine the overall winner, Sean Grosman was credited with the victory.

“I wish I could say there was some strategy involved, but I was driving 100% the whole time,” Grosman said in victory lane. “But I came into that rest stop here, and the guys made some good changes and the car came around so we were better in the second half.”

Grosman went on to thank the team – Graham Annis, Graham Flett, Ryan Kimball, Bill Craig – for their hard work, stating, “They have been with me a long time and have worked countless hours through the week. It’s unbelievable the effort they put into my program, and it pays off as it makes my life easy.”

The Super Late Models have one more event left on the calendar, with the last points event set to take part of Sunset Speedway’s Velocity 250 weekend in September.

“I learned years ago that Ryan taught me don’t points race,” Grosman said. “Race for wins, and the points will fall where they happen to. But I’m sure in the points scheme, it’ll play out well.”