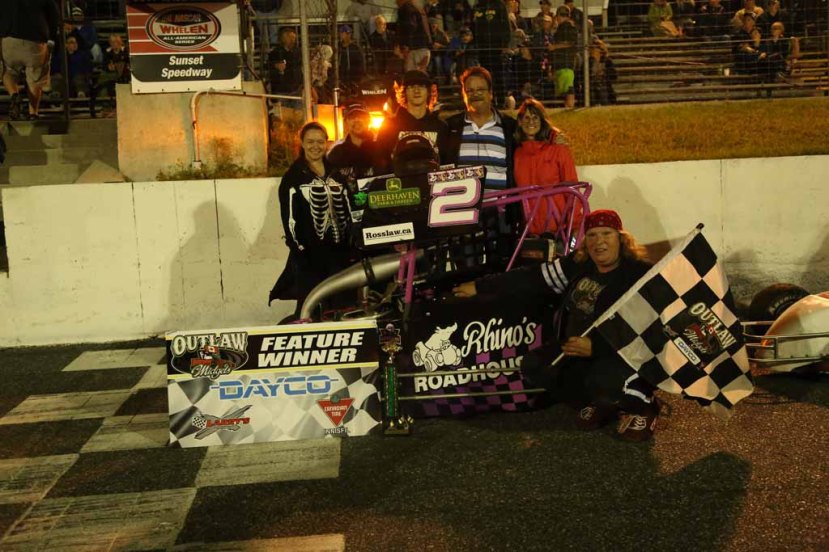 On Saturday night, the fans witnessed a rare sight as it wasn’t Jody Bound winning the Outlaw Midget feature. Instead, Jessica James picked up the victory at Sunset Speedway. 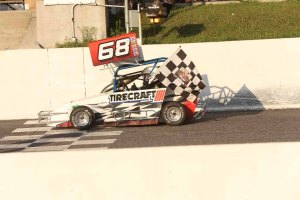 The third heat saw a quick caution with Paradzinski losing a wheel mid-race, while Spiez pitted on Lap 1 with a problem. Adam Carrothers went for the daily double ahead of Brian Woodland, Brown, Richard Woodland, Bradley, Lawson, Lassman, and McKibbon. 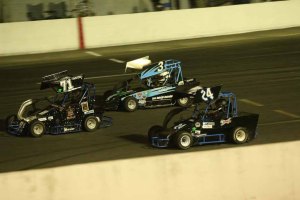 Rob McCall got a good restart to take the lead ahead of Lassman and Bound, but the caution flew a lap later for an incident in turns one and two. Amanda McCall would spin initially, causing a scatter to happen with the 20 having a slow roll-over in the process. Thankfully, there would be no injuries. Other drivers involved include Paradzinski, Brian Woodland, Van Dusen Jr., and Brown with McLean taking the biggest evasive action to avoid as he headed off the track through the turn two exit. 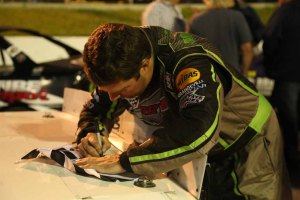 Bound got a good restart to grab the lead with James moving up to second ahead of Carrothers, McCall and Bradley. However, the action wouldn’t last long with the third caution flying on Lap 5 for Buttivant spinning around.

Bound got a good restart to grab the initial lead ahead of James, but James would get by him on Lap 6 to grab the lead. Bound now ran second ahead of Carrothers, McCall, Richard Woodland and McLean. McLean then got by Woodland to move up to fifth on Lap 8, with Lassman running seventh. Carrothers continued to move forward, passing Bound to move up to second on Lap 9. 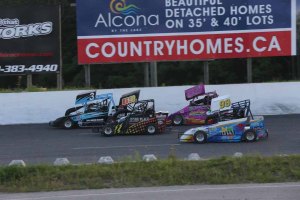 Carrothers’ climb to the front continued, as he’d pass James for the lead on Lap 11. His lead didn’t last long, though, with James retaking the top spot a lap later ahead of Bound as Carrothers fell back to third. McCall continued to run fourth ahead of McLean, Lassman, Woodland, Brown and Buttivant. McLean continued to move forward, passing McCall for fourth at the halfway mark.

Jessica James led the rest of the way to score the victory, with Adam Carrothers finishing second after a late-race pass on Jody Bound. Rob McCall and Robin McLean rounded out the top-five, ahead of Steve Lassman, Richard Woodland, Ryan Brown, Nigel Buttivant and Lorne Van Dusen Jr.