For the eighth time this season, a different face reached St Onge Recreation Super Stock feature victory lane as Ryan Semple broke through for his first win of the 2017 campaign at Sunset Speedway.

The night started off with a caution in the first heat, flying on Lap 7 as a result of Dustyn Mombourquette spinning in turn two. Jordan Howse picked up the victory ahead of Johnny Morrison, Gerrit Tiemersma, Chris Allard, Brandon Passer, Mombourquette, and Frank Davey. 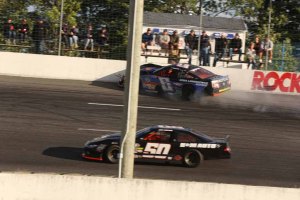 The third heat started off with a caution, as a result of Mombourquette getting spun by Passer. Jordan Howse went for the daily double ahead of Semeraro, Morrison, Allard, Mombourquette, Passer, Davey and Tiemersma. 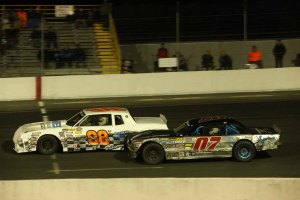 Tiemersma jumped out to the early lead ahead of Davey, Passer and Allard as Walters and Holmes ran side-by-side for fifth. Walters got the spot on Lap 3 ahead of Holmes, as Semple battled Semeraro for seventh. Holmes then back alongside Walters on Lap 4, passing him a lap later with Semple following him through for sixth. Semple then got alongside Holmes for fifth at Lap 7, passing both him and Allard to move into fourth a lap later.

Holmes then passed Allard on Lap 9 to move up to fifth, with Everingham getting alongside Allard for sixth. Semple continued to move forward, getting by Passer for third on Lap 10. He would then pass Davey a lap later to move up to second.

Holmes followed him through a lap later before the caution flew for Walters stopping in turn four. With 19 laps to go, Tiemersma led Semple, Davey, Holmes, Passer, Everingham, Allard, Morrison, Howse, Archibald, Semeraro, Mombourquette, Daley, Sikes and Walters. Under caution, Morrison and Howse were playing around, resulting in both drivers being sent to the back for the restart. 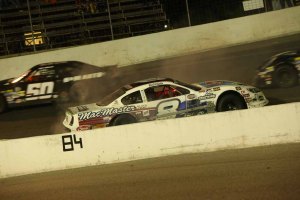 Semple would grab the lead on the restart ahead of Tiemersma and Holmes. Holmes then got alongside Tiemersma for second, completing the pass at the halfway mark with Davey and Passer side-by-side for fourth. Passer got the spot on Lap 17, with Semeraro getting alongside Davey next. However, the second caution would fly for Howse going around in turn four. Morrison would be blackflagged for rough driving, kicked out for the rest of the night.

Semple got a good restart to hold the lead ahead of Holmes, Tiemersma, Passer, Mombourquette and Archibald. Everingham would tag Archibald on Lap 20, which backfired because Semeraro got by Everingham and alongside Archibald for sixth on Lap 21. Two laps later, the battle would go three-wide for sixth with Howse joining the party, but the caution flew on Lap 24 for Allard having a problem on the backstretch.

Semple got a good restart once again, still ahead of Holmes, Tiemersma and Mombourquette as Semeraro and Passer battled for fifth ahead of Howse, Walters and Archibald. Holmes’ strong run came to an end with four laps to go, as he slowed with a mechanical problem.