Matt Haufe is set to prove that this season is his year to shine, as he swept both Ontario Legends Series events at Kawartha Speedway this season. 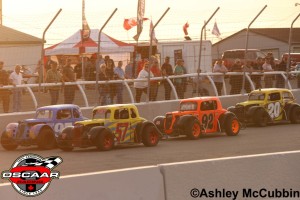 Teammates Foisy and McClelland went side-by-side for the lead early, with Foisy grabbing the top spot ahead of Adam Cuthbertson, as Haufe got alongside McClelland for third. Haufe got the spot on Lap 3 ahead of McClelland, with Cole McFadden and Riberdy side-by-side for fifth. The caution then flew, though, as Riopelle slowed with a problem.

The restart saw a big crash on the frontstretch, with a couple cars getting together, including Bill Mason making significant contact with the outside frontstretch wall and Richardson losing his front fender.

Foisy would get a good restart to keep the lead as Adam Cuthbertson and Cole McFadden ran side-by-side for second. Cuthberston got the spot on Lap 5, with Haufe following him through a lap later. Haufe would then keep moving forward, passing Cuthberston for second on Lap 7. Riberdy made his way up to fourth ahead of McFadden, McClelland, Wes Cuthbertson, Tyson, Jongen, Massey, Drimmie and Eades.

The race had a green flag look to it, but didn’t go as warranted for both Getliffe and Brown, as they both brought their Legends down pit road at Lap 12 when a problem. The caution then flew a lap later, though, with Cole McFadden blowing up through turns one and two.

Foisy got a good restart to keep the lead ahead of Haufe and Adam Cuthbertson, with Riberdy and Wes Cuthberston side-by-side for fourth as McCelland went side-by-side with Tyson for sixth at Lap 15.

Haufe completed his climb to the front, taking the top spot with four laps to go ahead of Foisy and Adam Cuthbertson, leading the way of the way en route to scoring the victory.