In a classic short track showdown, it’d be Rick Spencer-Walt with the bump-and-run to Nick Goetz with a couple laps to go to score the Sauble Falls Tent and Trailer Park Late Model victory on Saturday night at Sunset Speedway.

Bentley would jump the next pair of restarts, resulting in him being sent to the rear of the field.

Spencer-Walt would clear Thayne Hallyburton for third on Lap 14 with Holdaway rounding out the top-five. Goetz got alongside Latimer for sixth, completing the pass on Lap 16. Latimer now ran seventh ahead of Travis Hallyburton, Shepherd, Lane Zardo and Gresel.

The fourth caution then flew on Lap 18 for an incident with Fumerotn, Quesnelle, Billy Zardo and Inglis in turn two. With half of the laps complete, Morrow led Maltese, Spencer-Walt, Thayne Hallyburton, Holdaway, Goetz, Latimer, Travis Hallyburton, Shepherd, Lane Zardo and Gresel. 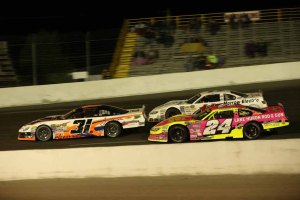 Spencer-Walt continued moving forward, getting alongside Morrow for the lead at Lap 26 ahead of Goetz, Maltese and Thayne Hallyburton as the battle for sixth continued. Lane Zardo’s run came to an end at Lap 27, as he headed down pit road.

Spencer-Walt now led the field as Morrow got alongside Goetz for second ahead of Maltese and Thayne Hallyburton with Travis Hallyburton and Holdaway still side-by-side.