Rick Spencer-Walt Returning to Sunset, Taking Stab at APC in 2017

After a championship season at Peterborough Speedway, Walt Motorsports will look to conquer another track in 2017.

The team plans to start off their season at Sunset Speedway, however has yet to finalize everything once the APC Auto Parts United Late Models of Ontario Tour kicks off their season mid-May.

“Returning the Sunset will be a big challenge for our team,” Spencer-Walt said. “So far looks like we will run the first few nights, until APC starts up and see where that takes us. I think for the first time in a long time we are heading into a season with a ton of confidence, and know we have a good competitive team, thanks to Big Daddy Eldon Wallis.”

The pieces began to fall together throughout the second half of 2016, with preparation beginning on Pro Late Model. However, Spencer-Walt notes the team has been working on it slowly, so that way they can make sure everything is right before they hit the track. Later on following the completion of the year, though, the decision to leave Peterborough and return to Sunset was made as a result of sponsors, and the two hour trip each way making for a long year.

“Being back close to home has brought more sponsorship, fans, and will bring more team members back that couldn’t make the trech,” he said. “Family has become more and more important as I grow and mature and I just want to have as many people around us to help and cheer us on a,long with our sponsors who want us home.”

Coming off last season, Spencer-Walt is keeping his goals simple for this season – simply wanting to score some race victories.

“We have put together a great team, great piece and I believe in myself more than ever that we can get this done,” he said. “Between Eldon, the Bakers, and Jr (Hanley), they have given me all I need; the rest is up to me!” 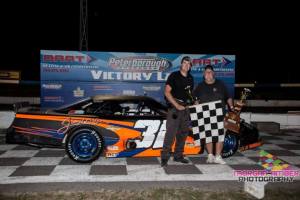 Last year, Spencer-Walt put together an impressive season at Peterborough Speedway, taking home the 2016 Limited Late Model Champion, as well as the Best Appearing Car Award at the banquet.

“Our biggest accomplishment of 2016 was definitely our championship at Peterborough Speedway,” Spencer-Walt said. “I am so proud of everyone that helped get us there from friends, sponsors, and family. I will never be able to repay Eldon for what he has done for me in racing and this was the only way to pay the big man back – get him that championship! And last but not least, my wife Danielle for all the crap, the heartache, and the melt downs. She stands there every week smiling, wiping the car, even covering herself in grease and oil. I truly have the best wife in racing.”

Across the season this year, Spencer-Walt was able to put up numbers which earned attention from everyone across the province. It’s worth noting in 13 races races this season (nine at Peterborough, three at Sunset, one at Sauble), Spencer-Walt posted five wins and 12 top-six finishes, including a victory in the Chase for the Colours event. He dominated the Autumn Colours Classic feature as well, leading 73 of 75 laps before contact and a flat tire resulted in an scheduled trip down pit road.

While time could be spent reflecting on the year that was, all focus right now for Spencer-Walt and team is on 2017.

“We need to keep looking forward, keep working harder, keep looking for that little bit of speed,” he said. “Don’t think I’m not proud of what we accomplished and there is nobody in this world harder on themselves than me. But if we sit and think about last year, we are not preparing enough for this year. When the clock struck 12:00 January 1st, nobody was a champion and the work starts again!”

Walt Motorsports is proud to be supported by Gohydrovac.ca, Jim Wilson Chevrolet, Frame Shop Huntsville, Auto Trim Design, Heidis RV, HOTC, Greensteelroof.ca, Crowe Bros, RCP Dyno and Tuning, Speedy Auto Machine, and Orser Technical Services. The team continues to add sponsors for the 2017 season, with more announcements expected closer to the season. If you’re interested in joining the team, do not hesitate to get in touch.