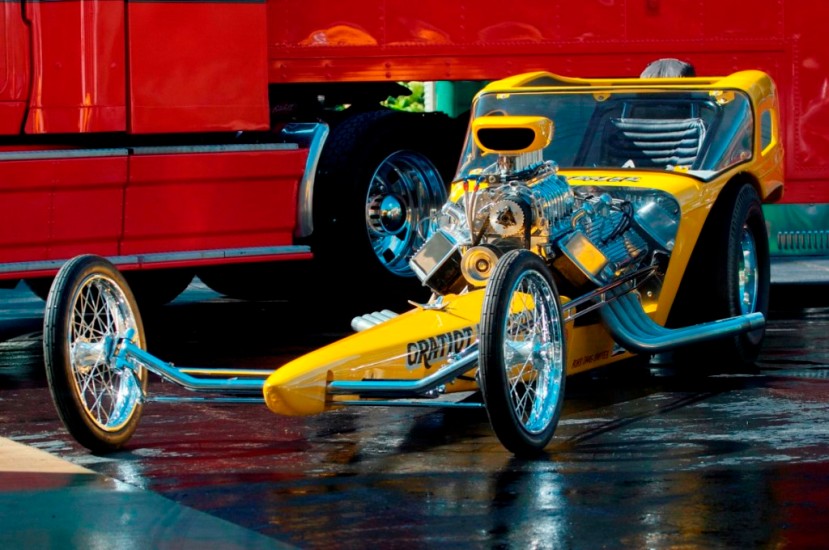 TORONTO, ON // JANUARY 16, 2017 • Every year at the DetroitAutorama, the hot rod world holds its collective breath, waiting to find out which vehicle will be awarded the prestigious Don Ridler Memorial Award, known affectionately as ‘The Ridler.’

In the time since Al Bergler’s bright yellow, front-engined ‘rail’ dragster dubbed ‘More Aggravation’ won the first Ridler Award, in 1964, many others have earned the same coveted honour. But there will only ever be one ‘first’ and visitors to the upcomingMotorama Custom Car & Motorsports Expo Presented by Mothers will have a rare opportunity to meet the man and see this history-making vehicle in person.

Motorama takes place March 10, 11 & 12 at The International Centre across from Toronto’s Pearson International Airport. Bergler, 80, lives in Michigan and will be in attendance all three days of the show to meet with fans and share stories, memories and advice about his legendary career as a builder and drag racer. It will be his first-ever professional visit to the area.

From body-man to ‘tin-knocker,’ to racer, car builder and automotive restorer, Al Bergler has created a legacy that is the envy of anyone involved in the sport of drag racing.

A member of the Michigan Motorsports Hall of Fame, Bergler began his career by building Hot Rods and running them on the streets in and around the Detroit area before taking his racing to the track and competing on the strips of Detroit and Motor City Dragways.

When “everybody went drag racing,” Bergler joined the fraternity, eventually finding a home with the renowned Logghe Brothers’ effort. Combining the skills of Ron and Gene Logghe with his own talent as a body fabricator, the trio embarked on a career that would create such innovations as the first ‘flip-top’ Funny Car in the late 1960s.

“The Logghe brothers were the frame builders and I was fabricating the bodies,” explained Bergler. “We did well, complimenting each other’s strengths.”

While maintaining a close working relationship with the brothers, Bergler eventually opened his own shop, in 1967, and over the years created exemplary examples of high-speed machinery for such drag racing champions as Tom McEwen, Tommy Ivo and Connie Kalitta.

Estimating that more than 300 cars have passed through his shop’s doors over the years, Bergler somehow managed to find time to build cars for himself and a host of hired, talented drivers. One of his initial creations was the car that earned him the inaugural Ridler Award at the Detroit Autorama show in 1964.

“I’ve said that my next car will be my favourite, but truly, More Aggravation will always be my personal favourite,” expressed Bergler. “In 1966 this car went 184 miles per hour on gas. It’s got a blown 392 Chrysler Hemi in it, pushing out between 1,100 and 1,200 horsepower.”

Continuing to race until 1983, Bergler eventually exchanged his Comp Bantam for several generations of ‘Motown Shaker’ Nitro Funny Car entries, finally hanging up his firesuit to pursue a slightly less trying past time of refurbishing and rebuilding former stars of the strip.

“Restoring cars is the biggest part of my business now,” said Bergler. “Over the past ten or 15 years, there have been a lot of people looking for cars with a history. When they find one, they go looking for someone to restore it. That’s where I come in.”

One of the projects closest to Bergler’s heart was the two-year restoration of More Aggravation. Although deemed ‘too unsafe to race anymore’, this car has been a featured star at shows from Kentucky to California.

“More Aggravation is an incredible and important part of automotive history and we’re very excited that Al Bergler and the car will be atMotorama this year. This is a once-in-a-lifetime opportunity to see something that laid the foundation for the same Ridler Award that the top builders in the industry are chasing to this day,” said Motorama car co-ordinator Gary Challice.

ABOUT THE MOTORAMA CUSTOM CAR & MOTORSPORTS EXPO: The third annual Motorama Custom Car & Motorsports Expo Presented by Mothers takes place March 10, 11 & 12, 2017 at The International Centre, across from Toronto’s Pearson International Airport. The show features more than 300,000 square feet of custom cars, hot rods, racing vehicles of all kinds, tuners, displays and exhibitors. Motorama is Canada’s biggest late-winter celebration of automobiles and motorsports. For information about the show, including tickets, sponsorship and exhibitor opportunities, and more, call (416) 962-7223, email info@MotoramaShow.com or visitwww.MotoramaShow.com.