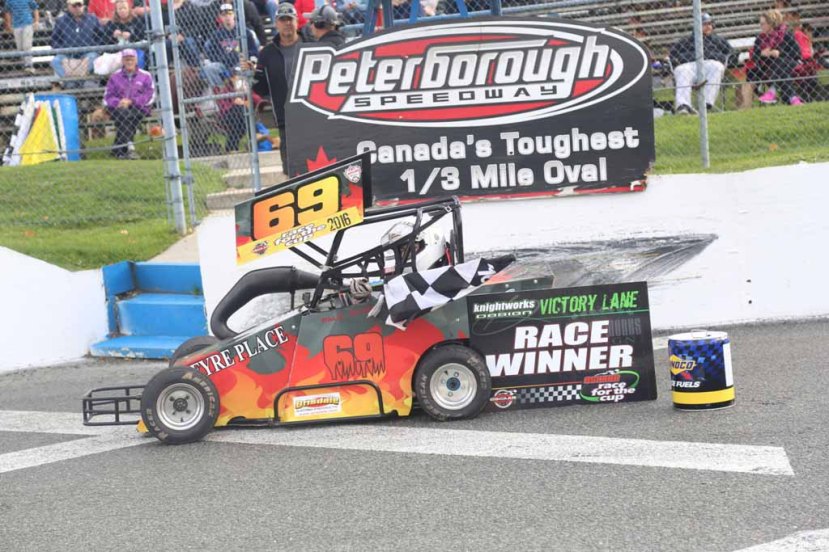 Wally Wilson kept the solid finishes coming behind the wheel of both his OSCAAR Midget and OSCAAR Pro Midget, posting a pair of top-10 feature finishes on Saturday night at the Autumn Colours Classic.

Behind the wheel of his OSCAAR Midget, he started off the weekend in victory lane by winning the opening heat. In his second heat, he picked up a fourth place finish.

Come feature time, he’d start the 20-lap event in the fifth position. He looked to try and gain ground early, though found himself in a three-wide battle for sixth with Nigel Buttivant and Shawn Stanley at Lap 4. Unfortunately, it didn’t go Wilson’s way as he lost some ground, falling back further in the field. He’d end up crossing the finish line with a ninth place feature finish.

Unfortunately, it wasn’t enough to advance in the OSCAAR Race for the Cup as Wilson will not be one of the three drivers fighting for the OSCAAR Midget Championship at Flamboro Speedway’s Frostoberfest.

Behind the wheel of his OSCAAR Pro Midget, he finished fifth in his first heat, followed by a quick spin on Lap 1 in the second heat handing him a fifth place finish.

Come feature time, he’d start the 20-lap event in eighth, looking to make up ground in the early stages. He’d move up to seventh by Lap 6, though fell back to eighth after being passed by Gary Triska at Lap 9. He’d cross the line in seventh.

With a solid first year of Pro Midget competition under his belt, Wilson finished second in the season ending points standings to Ted Greenwood.

Be sure to check out Wilson’s youtube channel at https://www.youtube.com/channel/UCuC0eAtn85Fxtn_5_KfobBw to see on-board videos of the action.

There isn’t much downtime for Wilson and his team as he will head to Flamboro Speedway on October 15 with both his OSCAAR Pro Midget and OSCAAR Midget.

Wilson and team are proud to be supported by The Fyre Place & Patio Shop, HAVE1.COM, and D & M Small Engine Repair this season.

Keep up with Wally Wilson all season long by liking his facebook page at https://www.facebook.com/Wally-Wilson-Racing-443805665798939/?fref=ts, while following on twitter at https://twitter.com/WallyWilson69.