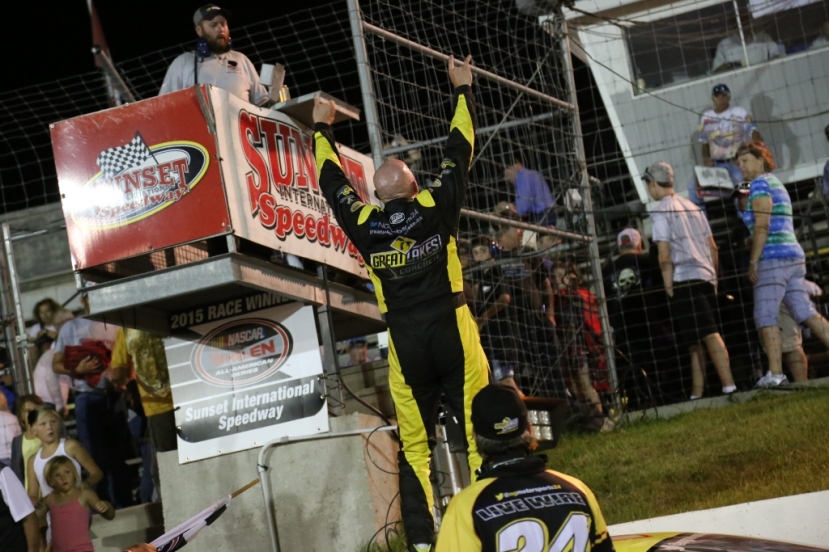 For the first time since June, Nick Goetz would return to Sunset Speedway feature victory lane as he scored the victory in the second Sauble Falls Tent and Trailer Park Late Model feature on Saturday night.

The initial start brought forth a battle for the lead between Bourque and Gresel, but the caution would fly for Inglis and Davey spinning in turn one.

On the restart, Bourque would grab the lead ahead of Gresel as Morrow and Latimer battled for third. Morrow would get the third spot on lap five, with Thayne Hallyburton getting alongside Latimer for fourth. Behind them, Zardo would move into sixth as Goetz, Brown and Travis Hallyburton went three-wide for seventh at lap seven. Thayne would get the fourth spot on lap eight, with Zardo pulling alongside Latimer to battle for fifth a lap later.

At the front of the field, Boruque continued to lead as Morrow looked to find a way around Gresel for the second spot. He’d get alongside her at lap 10, but fell back in line behind her a lap later. Thayne Hallyburton would continue to run fourth as Goetz passed Latimer for the fifth spot. Zardo would now run seventh ahead of Travis Hallyburton.

Wylie would look to make the move on Travis for eighth, with the pair coming together and getting connected off of turn two. They would stay connected all the way down the backstretch, before disconnecting as they got into turn three. There would be contact made in the middle of turn three and four, resulting in Travis spinning and the second caution of the night. Wylie would get black flagged for rough driving by the officials. With 22 laps to go, Bourque led Gresel, Morrow, Thayne Hallyburton, Goetz, Latimer, Zardo, Witty, Walters, Brown, Shepherd, Holdaway, Keeler, Fumerton, Inglis, Wilkinson and Pepin.

The restart brought forth a battle for the lead between Bourque and Gresel, with Gresel putting the No. 81 Sauble Falls Tent & Trailer Park, Brittneys Hair Studio, Spira Fire Protections, Keeler Electric Late Model out front on lap 16.

Gresel would get a good restart to keep the lead as Thayne Hallyburton moved into second ahead of Morrow, Goetz, Witty and Bourque. Behind Bourque, Holdaway would make his way around Latimer to move into the seventh spot on lap 22. Morrow would then get alongside Hallyburton for second at lap 23, with Goetz and Witty side-by-side behind them for fourth.

The caution would then fly, though, for Walters going around in turn two virtue of contact with Brown. Walters would display his displeasure with Shepherd under caution, with both Walters and Shepherd going to the back of the field for the restart. With nine laps to go, Gresel led Thayne Hallyburton, Witty, Goetz, Holdaway, Bourque, Latimer, Brown, Zardo, Inglis, Fumerton, Keeler, Travis Hallyburton, Pepin and Wilkinson.

The restart would bring forth the fifth caution as Walters would spin Shepherd in turn two.

The second attempt at a restart would see Morrow take the lead behind the wheel of the No. 11 Morrow Electric, CRS Contractors, plumbtech, SN Diesel, Halls Service Center Late Model with Witty getting alongside Gresel for the second spot. The caution would then fly, though, for Davey spinning on the front stretch. Davey would then be sent to the infield under the “three spins, you’re out” policy, done for the night.

On the restart, Morrow snatched the lead with Gresel getting surrounded by Thayne Hallyburton and Witty on each side of her. It wouldn’t work going into turn three, as contact would be made with both Gresel and Witty going around. The incident would also leave Holdaway, Latimer, Zardo and Fumerton nowhere to go, as they got collected. Everybody was able to continue except for Latimer, who had to be towed off of the track. Gresel, Witty and Holdaway would all restart from the back of the field for the restart.

The restart would turn messy at both ends of the field. Keeler and Travis Hallyburton would get together near the back of the field in turn four, but were both able to keep going. At the front, it was a different story as Morrow and Thayne Hallyburton would make contact, both spinning out for the eighth caution of the night. Both drivers would be sent to the rear of the field, handing the lead to Goetz. Goetz would restart as the leader with six laps to go ahead of Zardo, Bourque, Brown, Fumerton, Inglis, Shepherd, Walters, Holdaway, Gresel, Pepin, Wilkinson, Morrow, Thayne Hallyburton, Keeler and Witty.

Goetz would get a good restart behind the wheel of the No. 24 Lake Huron Rod & Gun, Mondo Car Wash, Boston Pizza, Super 8 Motel, Lord Elgin Fish & Chips, Rosner’s Service Centre, Roberto’s Pizzeria, Great Lakes Concrete, Austin Graphics and ImageWraps.ca Late Model to keep the lead ahead of Zardo as Bourque and Brown battled for the third spot ahead of Inglis and Shepherd. Brown would get the spot with three laps to go ahead of Bourque and Shepherd and Holdaway battled for fifth. Shepherd would then get alongside Bourque for the fourth with two laps to go.