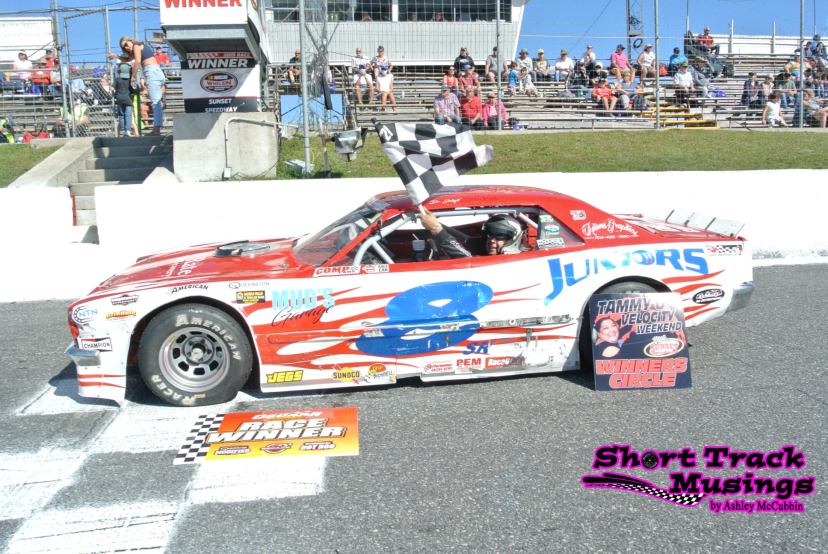 If you looked at the first half of the 2021 OSCAAR season, it ultimately was becoming a headache for Paul Senior. However, things turned around with a trip to Sunset Speedway in September.

His car suffered severe damage in the process, but he was able to make it through the contact ahead of him on the final lap to cross the finish line in first-place. As he said, “Just being at the right place at the right time and having a really fast car that weekend.”

It marked his first win in OSCAAR Hot Rod competition, and gives him momentum to carry into 2022 and beyond. Now he hopes to contend for wins and the points championship, battling alongside his son Paul Bogensberger Jr. who will be chasing Rookie of the Year honors.

“If I can be a bit more consistent as a driver with the engines and chassis we have, I know we will be a factor at all the OSCAAR events we compete in,” he added.

With the success at Sunset Speedway, and being closest to home, he certainly has the four dates on the schedule at the Innisfil oval circled. However, he also notes that Sauble Speedway is a close second on the list.

For Senior, his interest in racing developed as a kid living around the corner from Brian Malcolm’s shop in North Bay.

“I started working on cars that Ross Swayne built in Brian’s shop to race at North Bay Speedway before helping crew on Jeff Dunford’s car that season on Sundays,” he recalled. “I’ve been involved in racing for 34 years as a crew member or competitor and loved every minute good or bad of it!”

Through his time behind the wheel, he has made several memories, including winning six features in a row and 30 in total throughout the 2002 campaign at North Bay alongside the Fall Velocity win last year. He’s also seen his career influenced by several of the best guys in the sport.

“There’s so many racers I look up to over the years but I gotta say it goes back to the Northern Invaders from the Barrie Speedway days,” he commented. “Brian Malcolm, George “The Animal” Steele George “Hutchie” Harrison Mike “Beaver” Vaillancourt. I also have to include The Dutchman Peter Schotanus my car builder who I will go on record should be in the Canadian Motorsports Hall of Fame.”

The opportunity to run with OSCAAR now comes at this point in his career for several reasons.

“It gave me the chance to run various tracks with deep competition in the coolest looking cars in the province,” he explained. “You got more drivers that can win more so than any other class in Ontario.”

Since joining, he noted the biggest surprise has been the rapid growth over the past couple seasons despite being in the midst of a pandemic.