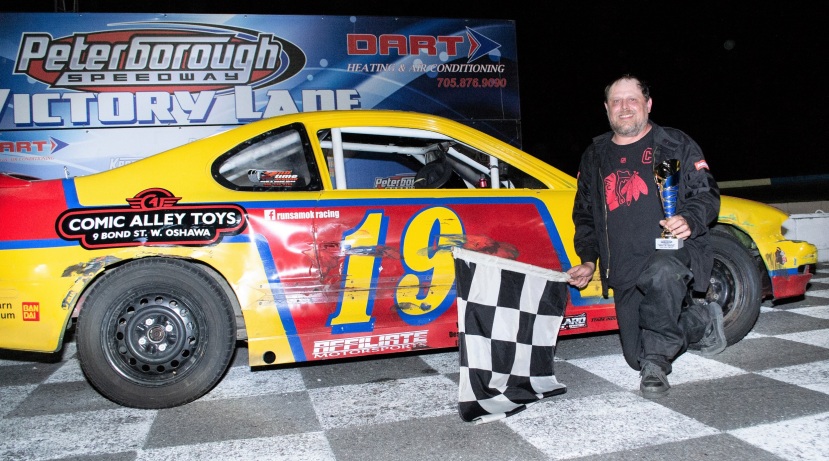 Five years ago, Shawn Solomon made the decision to go racing, taking his old road car, and turning into a bone stock. Unfortunately, it did not go as planned, with that being written off on the opening night of competition.

Although it was a tough experience to endure, he stuck with the racing bug, and it paid off, as this past season at Peterborough Speedway, he captured the 2021 Bone Stock Championship.

“My first thought is that I couldn’t have done it without all the support and hard work from my crew, family and sponsors,” he told SHORT TRACK MUSINGS. “It was really fulfilling though to be honest.”

Entering the season, Solomon’s initial goal was focused on scoring his first career feature victory, with potential to “hopefully compete for the championship.” While consistent all year with five top-five’s and an average finish of 3.83, the win did not come until championship night.

“To win my first feature and the championship all in one night was almost overwhelming,” he commented. “It was really exciting for me and our team, as we worked hard all year for that win and finally got it to close out the season was like a storybook ending. And to have my parents in the stands and come down and celebrate with us, really made it special.”

While the highlights were amazing, it wasn’t all sunshine and roses as RunsamoK Racing faced adversity. Outside of the expanding the team with his Victoria McLenon driving his old car, Solomon noted other challenges included having a fuel leak that caused a DNF in a feature, to utilizing the “gentleman’s rule for accidentally spinning the leader” and rebounding for second. He also had to make the decision for Nick Lees to fill in for him while a TV show was filmed at his comic store, which Lees rose to the occasion with a third.

“It just seemed to be one thing after another, and honestly there were times where it seemed no matter how hard I tried, I was never going to win that feature,” he added. “But my fellow racers kept my spirits high and kept me motivated to just go out there and get it done.”

Speaking of those fellow racers, they also made it a challenge for him as the Bone Stock division at Peterborough has always been filled with top-notch talent. Notably, 15 drivers scored at least one feature top-five in 2021.

“The competition level at Peterborough is more competitive than it’s ever to be honest with you; there were no easy races,” he commented. “With it being a shortened season and not everybody committed to a full season, and with both (Ryan) Oosterholt and myself moving on from the class, I think next year is going to be insane in the Bone Stock division at Peterborough Speedway, with guys like Jake Kelly, Sean Kennedy, Steve Finnegan, Kyle and Ang Novis, plus the Lavalle brothers plus so many others.

“I think it will be great racing to watch and it will be a rotating door of winners for sure!”

As Solomon mentioned, he will be moving up in 2022 to the Mini Stock division, as the off-season will be spent making modifications to the current ride to do so. It was a decision he had made at the beginning of 2020.

“I’d like to try to grab rookie honors there, but with Chris Tubman also moving up this year it will be a real challenge,” he said. “Winning a feature in Mini would be nice as well, but honestly at the end of the day, the goal is as always – have fun and try to put on a good show for the fans and sponsors. Without them, we wouldn’t be able to have the fun that we do!”