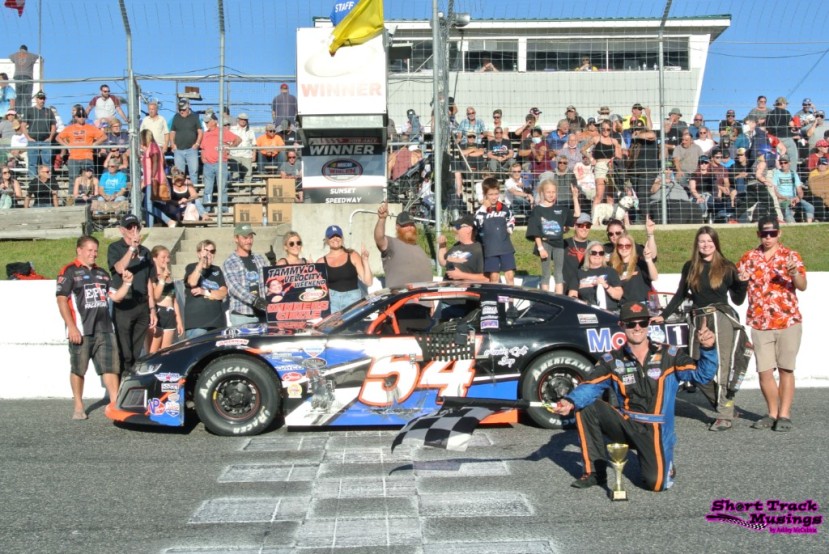 INNISFIL, Ontario — After a year filled with ups and downs, the speed is starting to pay off for Danny Benedict, as he won the Fall Velocity feature for the Pro Late Models at Sunset Speedway on Sunday afternoon.

Ryan Kimball grabbed the initial advantage with Fitzpatrick and Zardo side-by-side for second, as Howse and Benedict battled for fourth ahead of Dale Shaw. Zardo moved into second on Lap 3, bringing Benedict through with him as Fitzpatrick and Howse battled for fourth in front of Shaw, Adams, Grosman, Franklin, Hallyburton, Baker, Horner, Shepherd, and Samantha Shaw. 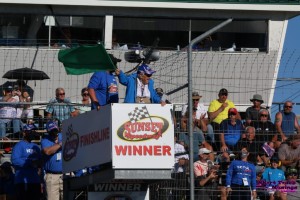 Zardo would get alongside Kimball for the lead on Lap 9, just as the yellow flag was waved. The ambulance would head off to the track to the pits with a brief red flag, before returning back to the infield.

Lane Zardo got a good restart to take the advantage as Kimball battled Benedict for second, with Howse and Dale Shaw side-by-side for fourth. Howse got the spot on Lap 12, with Fitzpatrick sixth in front of Grosman, Adams, and Hallyburton. Franklin would get alongside Hallyburton for ninth on Lap 14, with Adams challenging Grosman a lap later.

Kimball would prevail in the battle for second at Lap 17, taking the spot as they went around the lap car of Stoddard, with Howse continuing to run fourth in front of Shaw, Adams, Hallyburton, Franklin, Everingham, Grosman, and Shepherd.

Ryan Kimball would then challenge Zardo for the top spot on Lap 21, taking it a couple laps later, as Benedict and Howse both followed him through. Zardo now ran fourth in front of Shaw, Fitzpatrick, Adams, Hallyburton, Franklin, Everingham, and Shepherd. The race pace would then be slowed by the second caution at Lap 30 for debris.

The restart would see a battle for the lead between Ryan Kimball and Danny Benedict, as Howse and Zardo battled for third. Kimball grabbed the advantage on Lap 31 ahead of Benedict and Howse, as Zardo now ran fourth in front of Fitzpatrick, Shaw, Hallyburton, Adams, Everingham, Franklin, Shepherd, Samantha Shaw, Grosman, Horner, and Stoddard.

Danny Benedict would challenge Kimball for the top spot on Lap 40, but dipped his tire slightly in the dirt, allowing for Kimball to drive back away as Howse challenged for second. Behind them, Grosman made his way around Samantha for 12th on Lap 42, with Everingham down pit road with mechanical issues a lap later.

With 45 laps on the board, Kimball continued to lead with Howse now second in front of Benedict, Zardo, Fitzpatrick, and Dale Shaw. Fitzpatrick would then challenge Zardo for fourth a lap later, as Howse re-introduced the battle for the lead. The pair would make contact on Lap 48, with Kimball crossing over to the bottom a lap later.

Howse would seal the advantage, though, with Benedict working his way by Kimball for second on Lap 50 with Fitzpatrick now up to fourth in front of Zardo, Shaw, Hallyburton, Adams, Franklin, Shepherd, Grosman, and Samantha Shaw. The caution then came out on Lap 53 for Samantha going around in turn three.

Jordan Howse got a good restart in front of Benedict, Kimball, Zardo and Fitzpatrick, as Hallyburton and Dale Shaw battled for sixth in front of Adams. Benedict would get alongside Howse for the lead, but the caution came out for Fitzpatrick going around in turn two. The restart would see another yellow flag, with Shepherd spinning Samantha Shaw. 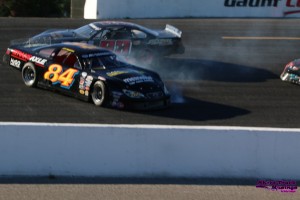 The second attempt was clean with Benedict and Howse battling for the lead in front of Kimball. Howse grabbed the advantage as Zardo ran fourth in front of Dale Shaw, as Hallyburton battled Adams for sixth, with Fitzpatrick alongside Franklin for eighth. Hallyburton took sixth on Lap 65 as the battle continued.

Danny Benedict made his move on Lap 65, taking over the top spot, with Kimball giving Howse a shot, though unsuccessful as he was unable to clear for second. the battle continued as the laps trickled down, with Kimball offering Howse a door slam with five laps to go, followed by tagging his bumper with two laps to go.

In the top spot, Danny Benedict led the rest of the way en route to scoring the victory in front of Ryan Kimball, Jordan Howse, Dale Shaw, and Billy Zardo.