Peterborough Speedway Hosts its Inaugural Event of the 2020 Schedule 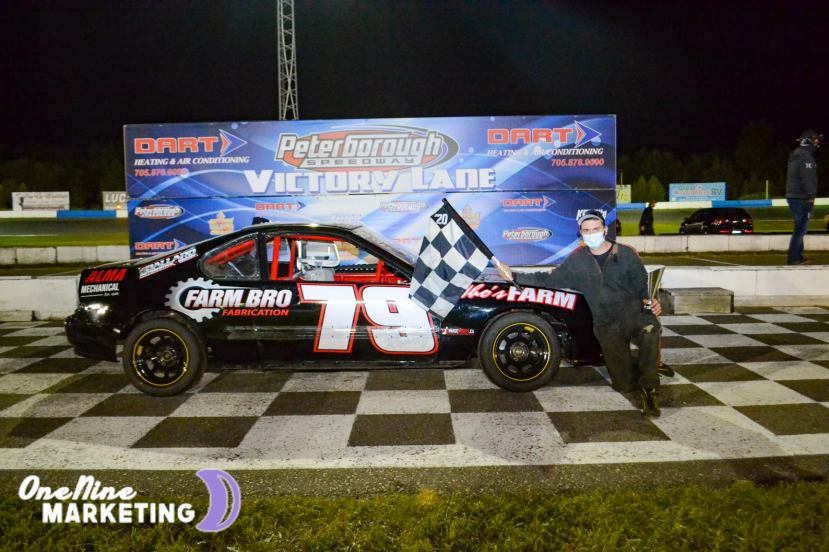 With 40 laps to settle the score, former track champion Ryan Oosterholt and invader Warren Paxton brought the Jiffy Lube Mini Stock field to the grid for the first main event of the abbreviated 2020 season. As he has done so many times before, Oosterholt took control at the drop of the green flag, while the rest of the pack battled for position in his mirror. Even though the pace was slowed for about a handful of yellow flags, the outcome was never in doubt. Oosterholt led Paxton, Craig Kamrath, Brad Lavalle and Chandler Bos across the line.

Paul Boundy and Anthony Dibello showed the way as the KOD Disposal Super Stockers hit the track for their feature tilt. Dibello made an aggressive move from the outside of the front row at the drop of the green flag and wrestled the lead away from Boundy. The move on the opening lap was a sign of things to come as the driver of the No. 16 machine built-up about a 10- car length advantage on the runner-up spot. Tyler Bouillon closed on Boundy in the late going but couldn’t take the spot. Coltin Everingham and Tim Burke chased the top 3 to the checkered flag in the 40-lap affair.

Ryan Oosterholt and Shawn Solomon paced the 19 car Battlefield Equipment Rental Bone Stock starting line-up for the entry level division’s first feature of the year. Following the script as the Mini Stock feature, Oosterholt took an early lead, but Solomon showed his strength with new colours for 2020 on his ride. The race’s final yellow flag – for a back straight issue with 34 laps complete – created a late race shootout. Nic Ramsay threw everything but the kitchen sink at Chris Tubman but fell short of wrestling the 3rd position away from the No. 88 machine. Steve Finnegan completed the top 5 finishers. 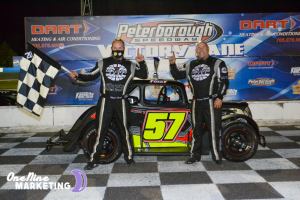 A 30-lap headliner for the Trailers Plus Ontario Legends closed-out the night’s action. Hard charging Miles Tyson took the lead from his inside front row starting spot, with Parker Traves, Nick Ledson and Matt Haufe coming on strong. Ledson claimed the runner-up spot with about 10 laps complete and was closing on the leader in lapped traffic. Just past the hallway mark, the yellow flag waived for an incident in the 4th turn that collected Tyson and ended his night. Ledson was the new leader on the restart, but Haufe was closing fast and claimed the position as the lap counter showed 22 complete and held on for the win. Ledson, Traves, Kevin Foisy and Adam Cuthbertson chased the former series champion to the checkered flag.

All finishing positions are unofficial and subject to post-race technical inspection and scoring review. 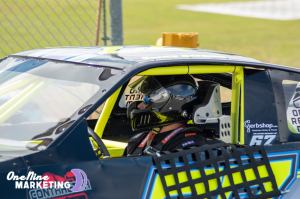 Bullring bullet points: Track staff and officials spent the week leading-up to the event reviewing the latest provincial directives and guidelines pertaining to social distancing and allowable crowd size. Signage was installed in the grandstands and pit area to make sure everyone was aware of the proper protocol…Car counts were strong in all divisions, but it was a tough night for reigning Bone Stock track champion Corey Strawn who suffered mechanical issues during practice and couldn’t make his long anticipated Mini Stock debut. Rob Crick also missed the year’s opening green flag.

Action returns Saturday, September 26th with the Bone Stock, Mini Stock and Legend classes, along with the Peterborough Speedway debut of the Ontario Midgets. Drivers are reminded that they will need to register for action and complete the ‘intent to compete’ process according to provincial contact tracing.

Check www.peterboroughspeedway.com or follow the track’s Facebook and Twitter social media platforms for complete schedule details. There is also a free app available for smartphone users.