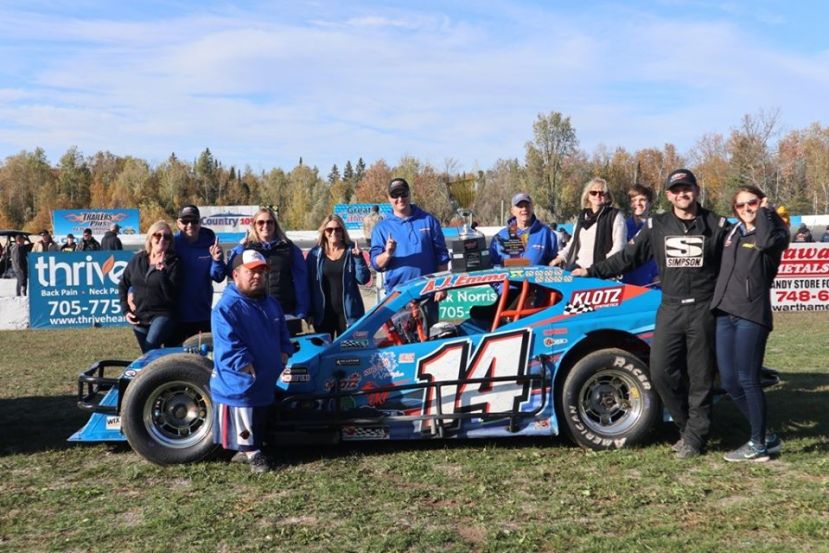 “Obviously I wish we were under different circumstances to celebrate such a milestone in OSCAAR’s rich history,” Emms said. “I feel that OSCAAR has done a great job at providing an opportunity for racers in Ontario to showcase their talent, along with providing fans with great entertainment that is very consistent in the show we’re able to put on. I feel even as a kid growing up watching OSCAAR Super Late Model races, the shows were always great and something that I always looked forward to.

“So to be a champion in an OSCAAR division is very important to me, and I feel as though OSCAAR has been able to survive and strive because there’s such great people associated with it. Those people are not only the people that are at the top of the organization, but the people who support week-in-week-out with tech, registration, tires, business management, etc. it also boils down to great fans who are supportive every week. We also have great drivers, great cars – so again, to last 30 years in this sport in a tough environment is a testament to those people.”

Growing up around late models all of his life, the original hope for Emms was to be behind one of those cars on a regular basis. He’d get the opportunity to do that through Mike Westwood, but open-wheel cars ultimately turned out to be the direction he headed.

The open-wheel concept was ingrained at a young age, as he worked his way up through the ranks from go-karts to Hurricane Midgets and Pro 4 Modifieds. The success there turned into an opportunity to get behind the wheel a OSCAAR modified for Allen Adams, ultimately paving the road to where we are now.

“I just really enjoyed the look of the modifieds, but also liked the technology that’s related to modifieds and also love to drive them,” he commented. “They’re without a doubt, they’re a thrill to drive with the speed and the tire, and with the open-wheel concept. So that’s what really drew me to the modifieds.

“I’m also a really big fan of traveling to different tracks. This is something that I’ve done all throughout my career is travel around to different tracks, and I feel as though it takes a real good skill set to see what drivers and teams will prevail throughout one season, instead of mastering one circuit. Now, that provides a different set of challenges, but I very much enjoy the touring type series and I think that makes it stronger and increases the fanbase. So I’m very thankful and happy to be a part of that.”

The competition level that has continued to increase each season hasn’t hurt the fandom behind the modifieds, either. Emms noted the competition has always been there, from the various drivers who have been a part of the series, to the teams continuing to evolve.

“I think that only helps as a brand for OSCAAR, and helps the sport move forward,” he said. “For me, that means I have to be on my best every time that we come to the track to win, but it’s very gratifying to be running against some of the province. It not only increases my skills behind the wheel, but my skills working on cars and making me become a better racer.

“Again, I’m very fortunate to have that opportunity where I’m surrounded by good people on my racing team but also such strong competitors throughout the series.”

After spending the past four seasons behind the wheel, everything came together last year for Emms en route to winning the championship with three trips to victory lane along the way. While recognizing it’s an important accomplishment, he admits not taking a lot of time to reflect at this time on the value of it.
“As a race team, we try to celebrate our successes, but we’re very critical of our performances and we are critical so we can look at ways to improve,” he admitted. “So right now, we’re looking at hopefully racing throughout this season and celebrating OSCAAR’s 30th year. But with that being said, I feel as though years down the road, maybe even in the next few years, I’ll say, ‘Wow, that was a major accomplishment and I’m very happy to do that’.

“Right now, the racer in me says lets go out and do that again because I want to win another one, but I understand how fortunate I am to be in a position to win a championship, and not only how much that means to me but my crew, my family, and my fans, which I’m very appreciative of.”

Combined with the great success, there’s been some great memories, both off and on the track.

“Some of those great memories have happened off the track with my crew, my family, and my fiancée,” he commented. “Others on-track, I would say without a doubt would be my 2016 Autumn Colours win. That was something that was very important to me and I look back at being one of the biggest races of my career. The reason I feel that way is the Autumn Colours Classic has such a rich history within the province of Ontario. it’s a race that we all strive to win every year, whether you’re going for the championship or not, Autumn Colours is an amazing deal and is important to get on anybody’s resume in racing.