Leandra Urbanek Having “Some of the Most Fun” Since Rookie Campaign

While most tracks have remained closed, Varney International Speedway elected to open their doors, hosting no-spectator events with each of their divisions on a weekly basis. The tracks policy has allowed several drivers to get to the track, including Leandra Urbanek.

“This season has been some of the most fun I’ve had racing since my rookie season,” she told SHORT TRACK MUSINGS. “I’m so grateful to Gord for not only giving us an opportunity to race, but giving us a regular season racing feel. It has been a bit different and not as social in the pits, but I find that everyone is just happy to be racing, which makes everything generally a bit more relaxed than regular season points racing.”

She has been successful as well, scoring a trip to victory lane and some solid finishes throughout the limited events, despite the competition being strong. As Urbanek notes, with Varney being the only place open right now, there are fast cars that regularly race at Delaware Speedway and Sunset Speedway there on a weekly basis. 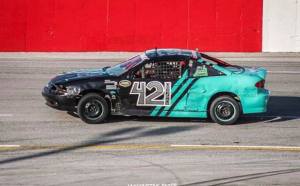 “The driving has been surprisingly clean and generally accident free, especially considering the amount of rookies and lack of drivers meetings,” she added. “I’ve met a lot of great drivers and have had so much fun overcoming the new obstacles every weekend brings.”

With her season underway, Urbanek is now hopeful other tracks will open up to allow for some traveling, while focusing on continued improvement on her car’s set-up and driving skills. She’s also hopeful they’ll be for some opportunities to run enduros this season.

For Urbanek, she got her start in racing via going to Varney as a spectator from a young age, watching both her father and grandpa race.

“I had been begging my dad for a car for as long as I can remember,” she commented. “One day, he called me and said, ‘We’re going to look at a race car!’ I had barely driven a car, let alone standard, but I did about 100 laps that Wednesday night, and on Friday, I was racing! Ever since then, I’ve done about four full seasons and have loved it more every year.”

Through her four years of experience, she says the most memorable moment was scoring her first career victory last season.

“After finishing the previous race backwards and bending the front end of my car to the left a good six inches, I spent the next hour making sure nothing would interfere when I got to the track,” she recalled. “I went into my second feature not too confident in the car but luckily for me, the car seemed to have been bent in the right direction, and I managed to wheel it into my first place. Unfortunately, the car didn’t look so good for it’s first victory lane picture!” 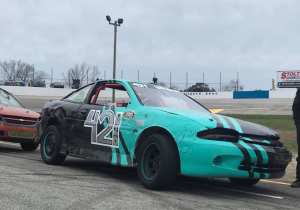 With having earned some recent success, she notes it’s hard to say where she’ll be five, 10 years down the road in her racing career.

“Obviously racing is one of my greatest loves, and I hope to keep it a part of my life forever,” she commented. “Whether it be progressing to bigger, faster cars, or helping my friends build their cars; I look forward to seeing what the future brings.”

Based on her experience behind the wheel, she says her advice to new drivers is to slap the yellow stripe on your bumper being a rookie, and start scratch for their first couple events.

“Not only is it intimidating to start at the front with all the experienced drivers behind you, it tends to cause a lot of pile ups,” she explained. “There is nothing wrong with running laps on the inside, getting to know your car and yourself as a driver, and earning your place at the front!”