Tim Tolton Ready to Have Fun with Shortened Schedule

With his commitments as part of the technical team at Full Throttle Motor Speedway, Tim Tolton will not be behind the wheel as much as fans may have been used to through the years. However, he won’t be stepping out totally, either.

“We haven’t really made a solid decision on what races we’re going to run, but we got different options for cars,” he told SHORT TRACK MUSINGS. “I’ve got the OSCAAR Modified, which hopefully I’ll get out for a few races, and most of my own racing will be pre-season or post-season; with working at tech inspector at Full Throttle, I have to limit my own racing.

“I’ll also have an OSCAAR Hot Rod that will also be able to run the Retro Late Models at Full Throttle, with a different driver – Scott Marvin. It’ll be competing this year – hopefully all the time, but it’ll be up to him when and where.  I also got plans for building a couple more old-bodied cars, but they won’t be this year, maybe next year.”

While he has not pinned down any particular events for this season, Tolton notes that he has circled the Rick Woolner Memorial at Full Throttle, and Peterborough Speedway’s Autumn Colours Classic on his calendar.

“I’ve been to 24 ACC events; I missed the first two, and last year would’ve been my 25th year running, but I ended up at Talladega instead,” he commented. “So aiming for the 25th event this year.”

When the schedule is set, though, Tolton says the team is setting no goals in particular, bu rather to “compete to just have fun and do the best that I can.”

He will also be taking advantage of cool opportunities when they present themselves, as well. This past Daytona Speedweeks, he got the opportunity to crew chief Norm Benning’s NASCAR Gander RV & Outdoor Truck Series effort.

“It’s been an amazing experience. It’s not something that I ever imagined that I’d be doing,” he said. “It wasn’t on the bucket list, but I guess that’s something I’ll be able to cross off.  Never dreamed of, never in my wildest dreams, and I appreciate Norm having the confidence in me to allow me to work with him. it may be a volunteer job, but it’s definitely a great experience.”

In comparing the short track scene to NASCAR, Tolton says he does not find many differences “in the actual racing and preparing,” other than the procedures being different and more strict to the rulebook.

With his involvement across the sport in different ways, it has given him a new perspective on the state of auto racing in general.

“It’s no secret that racing in general isn’t as popular by any means that it used to be,” he said. “There’s various reasons for it – there’s lots of alternative entertainment out there, people are busier, finances are always a big subject when it comes to racing. So the whole popularity of the spot is definitely down, but hopefully it hangs in for a long time so we can stay involved.”

One of the ways to improve the popularity is getting more kids involved, which Full Throttle has accomplished through their Kid Stock program.

“Everybody knows that once you get into racing, you stay in it and you need younger people in the sport to keep it going and be involved,” he commented. “It used to be that you were thrown in with a bunch of adults; it was like getting thrown in a shark tank. So it’s nice that they can learn the sport in the group of their own age and develop friendships. It’s amazing watching these young people go develop strong friendships through competing with each other.

“They’re not only learning driving abilities and skills, but sportsmanship and we need the older people in the sport to encourage them to follow good sportsmanship and not see their competitors as rivals or enemies.” 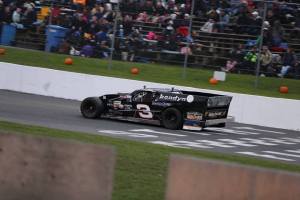 For Tolton, he did not grow up in racing like many of these kids are. He got his first experience watching an event at a young age with his aunt at Flamboro Speedway, but he did not get bit by the bug until later on.

“My brother was a welder, and he took on the job of being the welder at Flamboro Speedway,” he recalled. “He had a portable welder in the back of his pick-up truck and if anybody needed anything welded, he would weld it up for them. I got interested in that, and learned about endurance racing, and that’s how it all began.”

Since then, though, it seems the whole family has grown involved at different levels – asphalt and dirt – across the province.

“I didn’t grow up racing and I was a first generation racer, but then I got my mother involved and she was a multi-time woman on wheels champion at Varney Motor Speedway,” he commented. “She may have been the second generation, but she was the oldest generation. Then watching my son start racing, and develop into what my opinion is a great driver, that was awesome. He’s doing his own thing now, doing some dirt track racing, returning to asphalt – I’m not sure which one he truly prefers.

“Soon I get to watch my grandson get involved in racing. I’m sure looking forward to it.”

Choosing a memory that stands out above the others through the years is certainly no easy task, but Tolton centered upon his first and only win in the Sportsman Cup Series.

Based on the experience that he has gained through the years, his advice to those getting started is don’t make “everything about racing,” but enjoy it.

“You should also know how to walk away when you can’t do it any longer,” he commented. “Not everybody can do that, but sometimes you get too deep into it – it’s an addiction, there’s no doubt that it is.”