With the aligned rule package for the Super Stock division, a lot of people are hoping that it’ll bring back some of the excitement that we have seen in the past. Among those hopeful is Donovan Price.

“This season is kinda a big year for super stocks now that majority of the tracks have come together on a common rules package,” he told SHORT TRACK MUSINGS. “You may see more cars, but chances are they may stay the same till 2021. Some tracks have (also) changed things up to attract more teams as well.”

Price went on to add that the common rules were warranted by a lot of teams, so it is nice to see the promoters and track owners listening to their request. 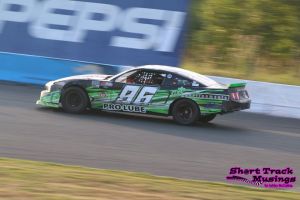 There is and always be some negative feedback on something like this, but as drivers we need to realize this is the first season for this and tracks may still need to do some fine tuning on them to balance all the cars out,” he continued. “But for now, it’s a step in the right direction to build the class back up. I also think once they get it all sorted out, the rules need to be locked in for a minimum two years.”

When it comes to his own program, it’ll be about racing when he can within his “budget and work schedule,” but will hopefully be running as many events as he can at Peterborough Speedway, as well as some possible special events at other tracks – including Flamboro Speedway and the Short Track Nationals at Jukasa Motor Speedway.

“My goals are to go out and try to get a checkered flag and have a blast doing it,” he commented. “I am hopping we have put some of our bad luck to rest.”

Last season, Price was able to make some good progress with the car and be competitive throughout the year at Peterborough Speedway. However, he admits that with the bad luck they had, they were unable to have the results showcase their improvements.

With a focus on becoming a weekly contender, Price says the key will be being more prepared and taking more notes on a weekly basis, while asking for advice more often when he is struggling.

Through all the lessons that he has learned to date, though, the advice that he has the next generation of racers is don’t go in over your head.

“It won’t be fun anymore and have patience,” he commented. “I have been in the sport for 23 yrs and have seen guys get in to it way over their heads and pack it in quickly Also don’t be afraid to ask questions.”