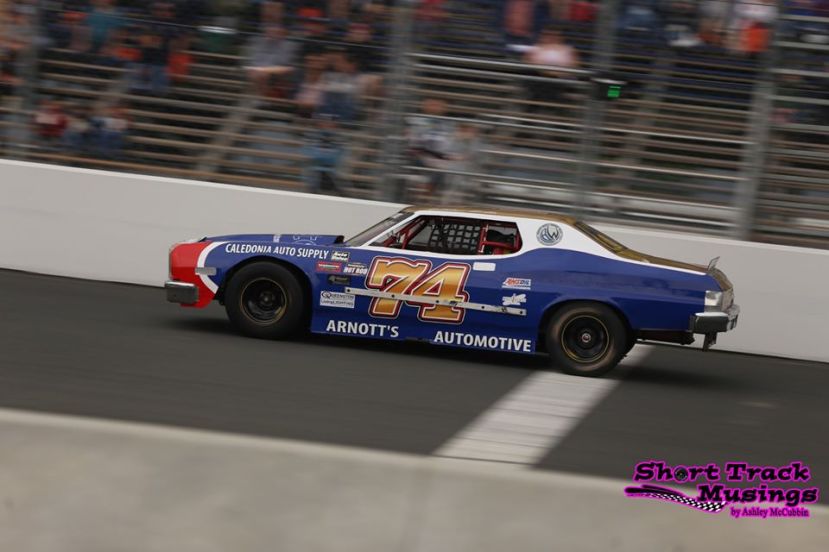 Despite a setback mid-way through the season, Brandon Robertson and team were able to score a seventh-place in the year-end Knightworks Design, Scott Reinhart Trailer Sales Ltd OSCAAR Hot Rod standings.

Brandon then put his brother Drew behind the wheel for the series’ next event at Sunset Speedway. The move paid off with him winning one of his qualifying heats, before running inside the top-five all feature long en route to finishing third. He then overcame a mid-race spin to finish ninth a week later at Peterborough Speedway.

The series’ return to Sunset at the end of July brought high hopes for the team following their performance in June. However, it ended in disaster as Drew got loose off of turn four, collecting fellow competitor Dan Rothwell in the process as both cars sustained significant damage.

With the Ford Torino out of commission for the rest of the year for repairs, the team sat on the sidelines for a couple weeks. However, they would return at Jukasa in August – thanks to Steve Book loaning them his spare Camaro.

Brandon would be back behind the wheel for the team, and managed to miss the mid-race incident en route to a fifth-place finish. He would back it up with an 12th-place finish at Sunset in September, followed by a 14th at Flamboro Speedway’s Frostoberfest.

The team would look to end off their campaign on a solid note at Peterborough Speedway, but motor issues plagued them all weekend.

Despite the rough seas, Brandon Robertson and his team proved that they can run with the best of the series. On behalf of OSCAAR, congratulations on your success this year, and we look forward to seeing the Ford Torino back on-track in 2020.