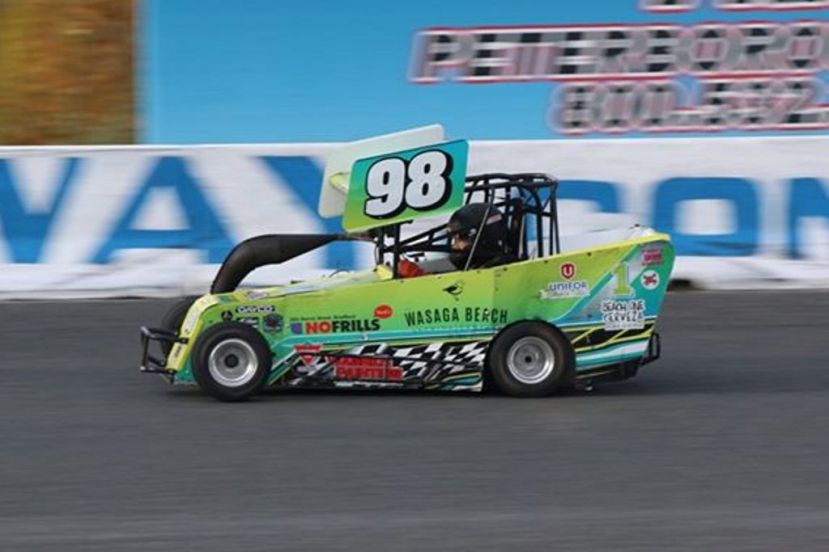 Getting faster on a weekly basis and running closer to the front, Kevin Spiez experienced his most successful Outlaw Midget campaign to date in 2019.

“Consistency is a huge thing with my racing,” he told SHORT TRACK MUSINGS. “The car was consistent and stayed that way all season. It was a top eight to 10 car all year. The battles we had, it was the same bunch of guys each week usually, and it was fun. Racing against guys like Larry Lawson and Wayne McKibbon, week after week, you know each other and where they’ll be and how they’ll react, so you’re always trying to outthink the guy. So he’s going to go here so maybe I’ll go here – so it made it fun.”

Throughout the season, he scored three top-five finishes and seven top-10’s, capped off by ranking second in the Fall Brawl standings to complete the year. While each week was fun, there’s no arguing that being able to score a runner-up finish at Full Throttle Motor Speedway ranks at the top of the mountain for Spiez in 2019. 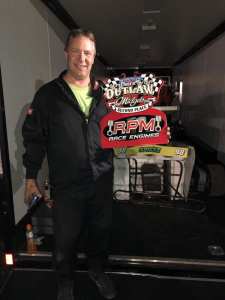 “I had my first podium this year and of all places at Full Throttle, which is where I grew up,” he commented. “I grew up in the town of Durham so I grew up at that track, and when I started racing, it was at that track. So it was nice to do something at home. The trophy is still sitting on the table.”

The night did not go smoothly as a whole, as Spiez was able to finish third in his first heat, but crashed out of the second qualifier. Thankfully, with the help of fellow racers in the club, he was able to make the necessary repairs to the No. 98 Wasaga Beach Brewing Company, Unifor Local 414, RRM Race Engines, No Frills Bradford Outlaw Midget.

“I was ecstatic and actually thought I won the race because Rob McCall was so far ahead,” Spiez recalled. “I came to get the checkered flag and I’m like, ‘Holy, I think I’m in first.’ Then I came around and saw Rob had already pulled down and it was, ‘On no, I’m second. But that’s okay – I’m still second!’

“Dave Middleton, the announcer at Varney, he’s a friend of mine as we grew up together in the town, came over and said he’s never seen anyone so ecstatic over second place. I said, ‘As far as I’m concerned, I won.’ For me, it was a huge victory.”

The success this season is something that can attributed to not only Spiez’s constant improvement in the series, but also help from Robin McLean. Spiez was quick to point out that McLean was “a huge force behind” with using one of the RPM Race Engines all season long. 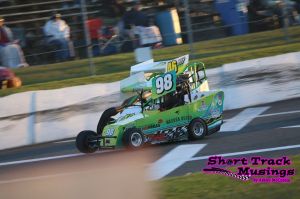 “A big part of my success this season was having a good motor under my car,” Spiez commented. “The first night out, first lap of practice, I blew up my motor. We switched it that same day at the track at sunset and I’ve had it ever since. It makes a lot of difference when you have some good power underneath you – even with my older car.”

Seeing fellow drivers help each other in the Outlaw Midget club is nothing new, as they try to create a family atmosphere with each event that they attend together.

“It’s complicated in some ways,” Spiez admitted. “You go out and race hard against the guy and sometimes things happen, right? So you come back, you get a little heated, but then after you had your say, you go back and say sorry about that and this is a total mistake and I shouldn’t have done that, and you move on. That’s part of the family – you have your say and you move on.

“Then it’s up to the veterans to teach that respect to the new ones coming in. I had to take one of the new guys after he crashed me out and said, ‘In a case like this, you go make sure that guy is okay, because there’s kind of etiquette to do that with family. Then you see if you can help him out because that’s how we are.'”

Spiez says the critical factor is realizing that there should be a level of respect, and the fact that everybody is human and heated moments are natural. 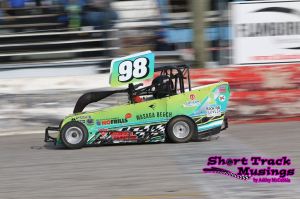 “Even end of the year was kind of nice because a shout-out to Richard Woodland in congratulating me on having a great year,” Spiez continued. “Coming from him, that meant the world because you’ve raced against this guy. Him, Jody Bound and Robin McLean – those are guys that you strive to be competitive with and when you have a chance to kind of be there, it’s pretty cool. It’s hard work, though, as driving with the top bunch of cars, you’re on it all the time. You’re up on the wheel, elbows up like the old saying. You’re pushing every inch that car has.”

As Spiez continues to get better, he says it will be critical moving forward into 2020. He and Robin McLean are working to have a new car ready for the season. Though if is not ready, the focus will be continuing to improve the current chassis by “getting the balance better, getting the chassis to work differently, and getting an old car to work like a new one.”

After getting his first podium in 2019, that’s something he’s focused on repeating now moving forward.

“I’d love to have another podium – that’d be the icing on the cake,” he said. “I’d love to win a race, but a podium again would be like winning anyway. But doing that, and seeing the club grow and function like a family. That’s a big part of a club and part of the appeal to it.”