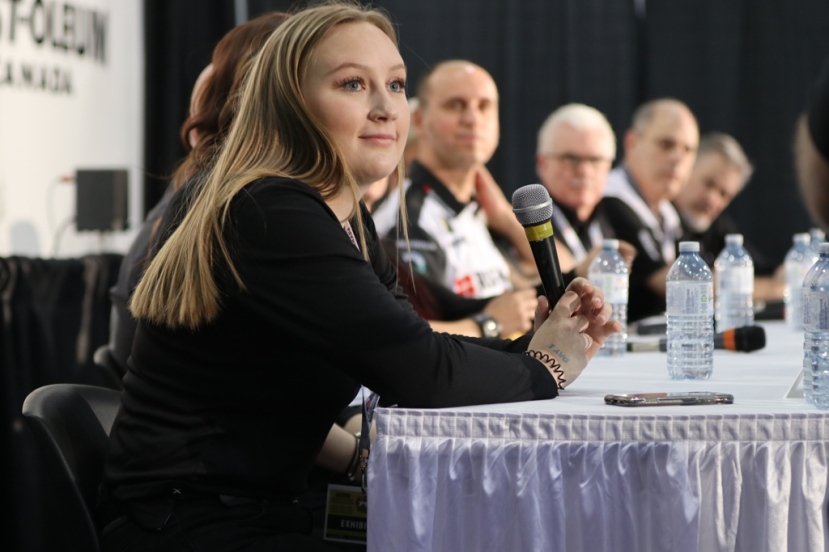 Although some people will tell you that high school is full dreams and great memories, it isn’t always that way for everybody. Taylor Thring unfortunately learned that the hard way, as she was constantly bullied to the point that she ended up having to leave the school.

With having endured the pain that she said, and wanting to help others in a similar situation, she launched an anti-bullying campaign in February 2017 titled #BurnoutTheBully. The ideology initially was to spared awareness about the consequences of the actions and encouragement for those going through it in knowing they weren’t alone.

Since then, though, it has become so much more as she released a video last year in conjunction with Motorsport Alley telling her story, and sharing tips for others. She was also able to appear on a variety of television shows and news outlets, using her chance to say her story as an inspirational platform.

“It’s crazy to think about,” Thring told SHORT TRACK MUSINGS of the growth. “2017, it was just to put stickers on a car. It wasn’t to grow my own brand, or grow myself, and it has done exactly that. Like I said at last year’s Motorama, I never thought I’d be at Motorama promoting that because as a kid, you see these shows put on and you see in Inside Track different shows they attend, and I’m here at one of them promoting this. To me, that means the entire world, like I’ve actually accomplished something. To have that come from such a negative experience, it means a lot to me, and I’m astounded by the amount of success that’s come from this.”

She notes that it’s been great to see some people be there from the very beginning, like her family, Coltin Everingham and Connor James, but also see how much it has grown with drivers at other tracks even wanting to help spread her message.

“Then to have fans, especially at Sunset – to walk through the grandstands at the track that you race at and have people stop you because they know who you are – not because you’re a racecar driver, but because they saw you on TV or social media but look up to you not in the racing aspect but want to be like you when they’re older,” she added. “They want to be strong enough to overcome something that breaks so many people. The fan’s reaction is what is fueling me to keep going.”

Admittedly, the reaction hasn’t always been totally positive with a select group of negative comments being spread across social media and in-person to Thring. However, seeing the positive reaction and what it has done, she says the 300 positive ones outweigh the three negative comments.

“I wouldn’t be where I am right now without those support me, and I give back almost every weekend I’m at the track,” she continued. “I like to do giveaways, I like to not charge people for stickers because I want them to know that I’m not here to take your money, but I’m here to offer support. I’m so grateful for the support that I have.

“I never thought that the people supporting me right now, like having my sticker on NASCAR Pinty’s Series cars. What the heck? L.P. Dumoulin ran my sticker last year and won the championship and did that sick burnout with my burnout the bully sticker on the back! That’s great content!

“To have Danny Benedict run my sticker – a NASCAR Division I Champion. To have Coltin continuing so strongly. He was there the day that I got bullied out of school. Since then, he’s been the constant supporter, running my sticker, not worrying about the colors in my logo and wearing the purple around the race track.”

The reach of her campaign was seen throughout the Motorama Custom Car and Motorsports Expo, as she was able to speak on the Education Panel. Oddly enough, the panel was hosted on International Woman’s Day, in which saw three woman speak out about their experience in what has been known as a predominantly male sport.

“To be in a male dominant sport, it’s hard,” Thring admitted. “And a lot of girls have mixed emotions about this because it’s either it doesn’t affect me because I’m as competitive as everyone else, or it does affect me because I am being treated differently.  I think I’m not as competitive as everybody else, but I feel I have enough respect in the community that I am not looked at as oh that’s girl, that’s a girl driver. I would like to think that I’m looked as a driver like everyone else.

“But obviously to fans outside, I am that female. I’ll be the first one to admit that I get more publicity because I am a female, but I am using that to make a difference. I think being a female in motorsports – if I was a male doing this right now, I wouldn’t be as successful. I will forever be grateful that I am a woman, forever.

“I’m glad to have woman like Kendra Adams, yourself, my mother, Sandra (Todish) who owns Sunset, and Carol (Slaughter) – I have amazing woman surrounding me that are pushing me to do better that are business woman who know what it’s like to struggle and work in the industry that I want to go into. Even speaking on the educational panel at Motorama, having those three girls together and hear the different stories, and knowing they succeeded, it’s another thing that fuels me because it’s hard for woman in any career to succeed. Knowing I have this great group around me, I know I will succeed.”

Despite watching everything grow around her, from the campaign itself to her own brand, there is one promise that she intends on keeping no matter what.

“I think that’s the most important thing that I need to remember through all of this is to stay humble to those kids that need to hear it, and not let the growth of this get to my head,” she commented.

Stay tuned to SHORT TRACK MUSINGS as we will be featuring another interview with Taylor Thring, in where she details her racing plans for the 2019 season.