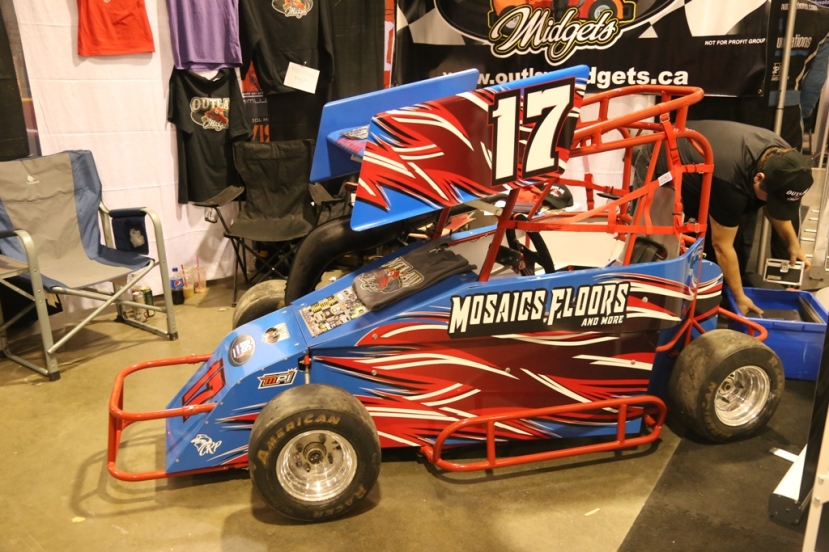 After a decent rookie campaign, Mikey Homewood will be back with the Outlaw Midgets once again in 2018.

“Looking forward to having lots of fun this year,” he told Short Track Musings. “Last year was a busy year. We had a baby girl named Emmeline, moved to a new city, and I decided to start racing in the middle of all that. It was a busy task just to get to track and learn what I could. This year I’m defiantly more prepared. Looking forward to getting back to the track after a long winter. We totally went through entire car over the winter. Can’t say enough how much I appreciate all Robin McLean did for me and for what he does for the club. He never stops and is always there for help. Last year I rode around just getting some experience. Excitement has been building throughout the winter.

“My love of racing comes from Dad who we sadly lost in November. Like to dedicate this year to him. He always knew how to have fun in anything he raced or helped work on. Like to bring that passion with me every race.”

His passion for racing, whether as a competitor or fan, has him focused solely on making this year as fun as possible.

“With all the hard work completed over winter and with some experience from last year, I’m looking to be more competitive and getting faster,” he said. “Happy to have RPM race engine again this year.”

He’s also quick to note that the new addition of Full Throttle Motor Speedway to the schedule has him excited as he hasn’t been back there since he was a kid. Now having success, he knows that will be a challenge with the level of competition, citing Jody Bound and Jessica James among those to watch.

“Looking forward to seeing how fast the Robin McLean No. 97 newly built rocket is this year,” he added. “There are a few of rookies who I think will make some noise this year – Johnny Paradzinski No. 4 and Jordan Howse No. 79.”

The growth in talent is also one of the reasons that Homewood is excited entering this year, in general.

“It’s a great feeling being a part of a club that if you need a hand, part or help with some question,” he said. “They offer there knowledge to get you back out there on the track. Your going to have to be on your game if you want to race in the feature with a stacked field of cars.”

For Homewood, his involvement in racing came easily as his family has been involved his whole life, dating back to the 1950s with his grandpa racing.

“My dad helped out on numerous teams when I was young, also sponsored a couple street stocks at Flamboro Speedway,” he said. “I would love to see the Outlaws race there being I spent so many summer nights watching races there. I ran partial Street stock schedule at Oshweken back in 2003 with my brother; had a great time running that.”

It’s also easy to see that there has been a lot of memorable moments, including a time at Ohsweken Speedway where the steering wheel wasn’t locked properly during hot laps.

“I pulled it off safe and sound and hit the inside wall,” he said. “I was laughing so hard when emergency crew came over. Then last season at Sauble, I spun to avoid another car which had me having to catch the field so we could get going again. I almost caught them in turn 3 heading to white flag when my rear brake locked. It threw me into wall causing me to roll over. Ended up with nice crushed wing to hang on garage wall.

“Last year, I got to go watch the Southern 500 in Darlington – also have been to Talladega, Daytona and Chicagoland.”