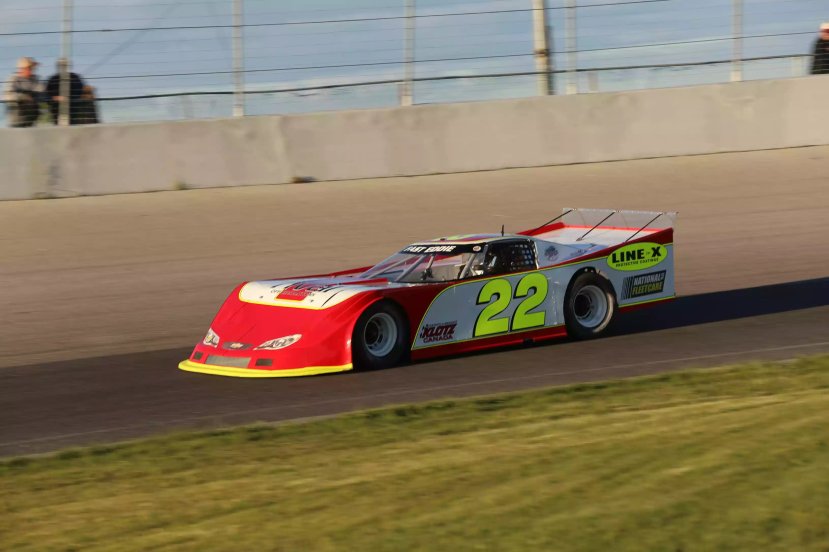 After starting off the year in victory lane, Glenn Watson was consistent all the way through the 2017 OSCAAR Outlaw Super Late Model season en route to being crowned the series champion.

“I think it’s pretty special to be able to pull it off,” Watson said. “It took a lot of dedication from our whole team to put together a good car and run all the races; it was a long season.”

Kicking off the season at Flamboro in May, he quickly took the top spot off drop of the green flag in the first of two 25-lap features, leading flag-to-flag en route to victory, despite being challenged by Shane Maginnis in the closing stages. With an invert in place for the second main, Watson made his way up to fourth by race’s end.

The beginning of June took Watson back to familiar territory, in the form of a trip to Kawartha Speedway. After winning the opening heat, he would charge from a fourth-place starting spot to take the lead on Lap 4, beginning to check out immediately on the field. From there on, he would cruise to his second straight victory.

Returning back to Flamboro, he showed his familiar speed once again, but ran into some troubles during the first event which saw him unable to complete all the laps. He quickly redeemed himself, though, scoring the victory in the second 25-lap feature.

The month of July saw the super late models make their lone trip to the beach for the year. Glenn Watson led the charge to Sauble Speedway, and didn’t look back the whole way as he scored the feature victory in dominating style. He then returned to Kawartha a couple weeks later, taking the top spot on a Lap 19 restart and cruising away from the field for his fifth feature win.

With such domination, Watson was one of the clear favorites heading into the Don Biederman Memorial at Flamboro Speedway. However, he met his match, having to settle for second behind Andrew Gresel in the first 25-lap feature. The second main event saw the veteran come up short again, scoring the runner-up behind Charlie Gallant following a lengthy-battle with Tyler Hawn. As a result, he would be credited with second overall for the event.

The beginning of August welcomed the super late’s first trip to Peterborough Speedway of the season for the Chase for the Colours. The event didn’t go as planned, with Watson placing seventh and fifth in the pair of 35-lap features.

Returning back to the speedway in October, it was clear that Watson wasn’t going to allow a repeat of that performance. Starting fifth, he quickly made his way up to the third spot, looking for second on nephew Brandon Watson. Glenn went to make a move underneath Brandon on Lap 3, but contact resulted, causing Glenn to spin and be the first caution. Restarting from the tail of the field, he put together an impressive drive all the way back up to the runner-up spot, where he’d finish the year to clinch the championship.

On behalf of OSCAAR, congratulations to Glenn Watson on a very successful 2017 campaign. We wish you the best of luck moving forward into 2018.