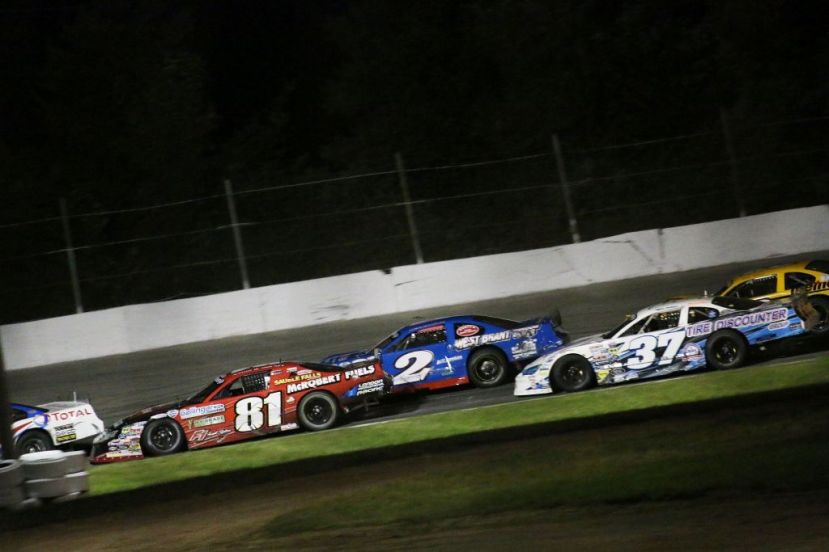 As we continue to approach the 2017 season, this series will take a look at some storylines to watch in different series and tracks this season. Feel free to add what you’re hoping to see via commenting on the post, facebook, or twitter.

When the APC Auto Parts United Late Models of Ontario Tour launched a couple years ago, everybody expected it to be big – but maybe not as big as it has grown, attracting some of the best racers from across the province to the line-up for 2017.

The series has been around for two years, featuring a different champion each year – Dale Shaw in 2015, Andrew Gresel in 2016. Can the trend continue in 2017?

Shaw has announced he is stepping out of the driver’s seat for the season, but Gresel has expressed his intentions in returning for another run. After a 2015 season filled with bad luck, he turned things around in a big way last year – winning five races and scoring eight top-10s in nine races to win the championship. Given he finished the year with as much speed as he started, it’s obvious he’ll be a favourite to repeat this season.

However, he’s certainly not going to have it easy. Other than Gresel, three others scored eight top-10s in 2016 – Jamie Cox, Shawn Chenoweth and Shaw. Cox and Chenoweth have been known as heavy weights in Late Model competition for several years, with success for both parties. Chenoweth has come out on top at Flamboro Speedway in recent championship battles, while Cox was the man for Delaware. The pair showed speed at all the events, running up front contending for the win – though faded whether due to incident or bad luck. If either can go on a roll, they could dethrone Gresel.

There’s plenty of others names that could  be mentioned as contenders, from Sauble Speedway front runner Jason Parker, to Billy Schwartzenburg who enters this season with more lessons under his belt following a second year of a late model competition. There’s also Matt Pritiko who always seems to have his program together, along with Joshua Stade who feels he could be right up front.

With the number of names that could be possibly mentioned, it’s easy to see why this year could be one of the most competitive seasons to date.

While familiar faces like Shaw, Gresel and Chenoweth rule the front of the pack, there’s a couple young faces that are set to mix things up this season. Teenagers Hudson Nagy and Treyten Lapcevich are set to be part of the field this year, with the ladder running the full schedule.

For Nagy, the jump up a division comes after a great season in thunder car competition at Flamboro with seven feature victories to his credit.

“It’s going to be different,” he told Short Track Musings. “Going from a thunder car to a late model is a big jump, with competition, the way it drives, the way it handles, how fast you go – everything, really. Your equipment is so much more. It’s hard to explain, but it’s so much more than the car that I was driving last year. So it’s going to be a wild and crazy experience, but we’ll get through it.”

Meanwhile, Treyten Lapcevich has impressed since he set foot behind the wheel of a racecar. In his first season of stock car competition at Sunset Speedway at 11 years old, he captured the Mighty Mini Championship with four feature victories. He then ran Super Stock last year, finishing third in points with a pair of feature victories.

Just as the series grows in youth, there’s also a movement amongst veteran short track racers adding their name to the mix – namely a par of drivers with NASCAR victories under their belt – J.R. Fitzpatrick and Jason Hathaway.

Fitzpatrick is set to run the full schedule, driving the No. 37 Late Model entry for Marvin Freiburger Racing. He is coming off a championship season, which saw him pick up the 2016 OSCAAR Super Late Model Championship with two victories.

“APC is no doubt the toughest place to race right now,” he told Short Track Musings in December. “There is a lot of heavy hitters that put in a ton of effort and resources., But I also feel that we can bring a package there that can run up front and contend for some wins. Marvin and his team want to provide us with the best equipment and all the resources we need. And my crew chief Deon and I are really communicating well and this is the environment that we will shine because of both our backgrounds.”

Meanwhile, Jason Hathaway retired from full-time NASCAR racing to put together an impressive schedule, which mixes NASCAR and short track together. Hathaway will run both Canadian Tire Motorsports Park Pinty’s Series events, along with two late model events out west and four APC events – both events at Delaware Speedway, the season opener at Sunset Speedway, and Jukasa Speedway in the summer.

While not known for being a late model racer, Hathaway has impressed before, including a couple top-five Limited Late Model finishes at Sunset Speedway and some wins at Kawartha Speedway.

Each year, the APC Series puts together one race that just has a spectacular finish leaving fans in disbelief.

In 2015, it was the battle at Sunset Speedway between Jason Parker, Matt Pritiko, Jamie Cox and Mat Box. After Parker grabbed the lead with nine laps to go, Matt Pritiko was able to snatch it back a lap later, before Gresel took the top spot with two laps to go and led the rest of the way.

In 2016, it was the battle at Sauble Speedway between Pritiko and Shawn Chenoweth. In the closing laps, Pritiko continued to stalk Chenoweth lap after lap, waiting to make his move. On the final lap, Chenoweth slipped just enough off of turn two to where Pritiko dove inside of him. The pair remained side-by-side for the rest of the final lap with Pritiko getting the victory by a bumper at the line.

“The show Matt and I just put on you will not get to see anywhere else. You need to follow this APC Series as there’s nowhere else you can see two people beat and bang for 100 laps and not wreck each other.” – Shawn Chenoweth in victory lane that night.

The only question now remains – where will the memorable race of the season come in 2017?

The 2017 schedule for APC gets an expansion with the welcoming addition of Jukasa Speedway.

The track formally known as Cayuga Speedway has been closed the past seven years, but grew a rich history before then. Opening back in 1966, the ⅝-mile oval similar in size to Martinsville Speedway hosted a variety of series, including CASCAR, NASCAR Canadian Tire Series, the American-Canadian Tour, NASCAR Busch North, Hooters Pro-Cup, USAC, ISMA Supermodifieds, DIRT Modifieds and the ARCA RE/MAX Series. In the past, famous names like Bobby Allison, Benny Parsons, Don Biederman and Dick Trickle have been known to take part in events.

Now with a new name on the front door step, Alex Nagy and his staff are currently in the process of getting everything up and ready, with the first layer of asphalt put down in the fall of 2016.

With the excitement buzzing off drivers through discussions at the Motorama  Custom Car and Motorsports Expo, the event in August is bound to be a highlight on the 2017 schedule.