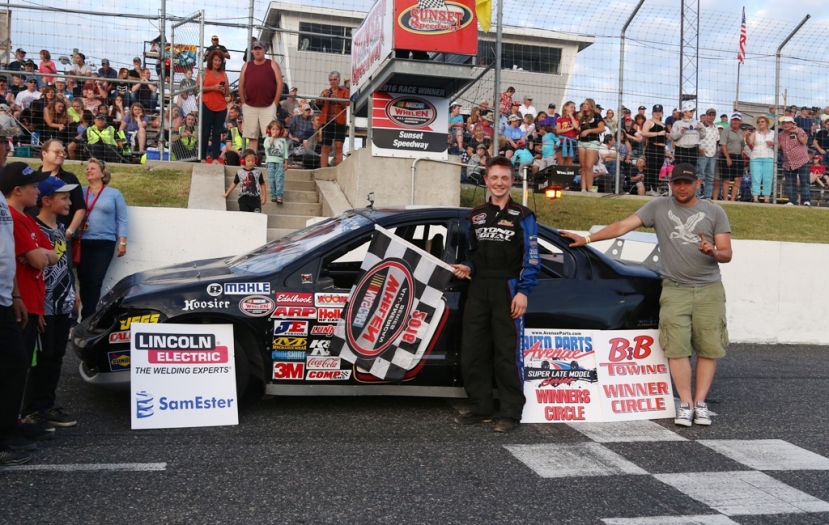 Making his debut behind the wheel of a four-cylinder stock car, Daniel Montanari enjoyed a season full of success in 2016.

“I think the 2016 season was amazing,” he told Short Track Musings. “It started when I finished third on opening night and I knew that I could compete in this division. I learned a lot through this season and learned what to do and what not to do and I also met a lot of great people and sponsors along the way and I’m even more excited for 2017.”

As Montanari stated, he started out the season near the front of the field in picking up a third place finish. While week two didn’t go as intended (14th), the third week saw his dreams met.

Starting 17th in the 20-lap feature, Montanari was able to work his way to the front, breaking into the top-five just six laps into the event. He was then able to get a good restart then, slipping into the runner-up spot behind Johnny Paradzinski. While many pinned Paradzinski to get his second straight victory, it wouldn’t be the case.

The final restart with three laps to go saw the top-two battle for the lead, side-by-side, for both laps back and forth, with contact amongst the battle. As they came to the checkered flag, it’d be Daniel Montanari getting the win by a bumper ahead of Johnny Paradzinski.

“Looking back on 2016, the moment that stands out would have to be my first win,” he said. “That’s just something you never forget and you remenber every detail of it. During that race I was running second and realized that I could stay just ahead of the first place car on the outside. So that was the plan – just get on the gas as soon as possible and drive smooth. I was pushed up into the wall but I still kept my foot in it. It was an amazing experience that I will never forget.”

From there on, the driver of the No. 9 United Roofing. Highway Technology, Loops, Sensors and Control, and Permatex Dodge Neon was able to capture two more wins, six more top-fives and nine more top-10s before the season came to a close.

The success was no surprise, for many, based on how well his brother Nic Montanari ran in the Mini Stock division, eventually capturing the title, and his father Rino Montanari having lots of racing experience, having crew chiefed for Kerry Micks and Mark Dilley in the NASCAR Pinty’s Series.

“With my dad know a lot about racing it has really helped,” Daniel said. “He had never set up a Acura Integra before or a Dodge Neon but we quickly learned so we could keep up with the competition. He has also really helped me with learning how to control the car and what to do in different situations and how to set guys up to pass them. I can’t thank him enough for all that he does for me and my brother.”

With his success in the track’s second-tier Mini division, Montanari will move up to the quicker Mini Stock class, hoping to keep the success going.

“We are going to come out stronger and better than ever,” he said. “Last year I had a couple DNF because of mechanical failures which put us back in points. My goal will be to keep the car in one piece and drive the wheels off of it. I’m really excited for the upcoming year.”

He says the goal is to always run hard – but to keep the car in one piece and stay consistent. Of course, there is the factor of knowing the competition will be tough in being against quick cars, and the track announcing they are coming both Mini Stock divisions together.

“I think merging the divisions will be good for the fans as they get to see a full show every night with lots of cars and hard racing,” he said. “It will also help our division in the NASCAR points as the more cars that run the more points you get. Which always helps. I don’t think there will be any problems with rookies coming into the large division but it is very tough competition.”